Cape Raoul is a rural locality and a natural feature in the local government area of Tasman in the South-east region of Tasmania. It is located about 13 kilometres (8.1 mi) south of the town of Nubeena. The 2016 census determined a population of nil for the state suburb of Cape Raoul.

Cape Raoul is a confirmed suburb/locality. 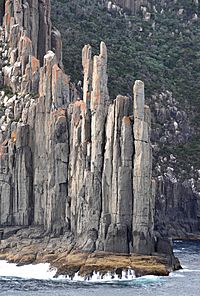 Tip of the cape from the sea.

Cape Raoul (the natural feature) is situated at the southernmost part of the Tasman Peninsula, in south eastern Tasmania. It forms the coastline of Raoul Bay, and is part of the dolerite landscape of the Tasman National Park.

The cape features rock platforms, towering cliffs, columns and off-shore islands. There is a 300-metre-high (980 ft) cliff with scenic views of the coastline. A 7-kilomenter walking track there then descends steadily onto the Cape Raoul plateau, with the spectacular cape of dolerite columns at the end of the plateau.

The cape is accessed via Port Arthur at the end of Stormlea Road.

The columns at the cape appear to be a colonade formed from columnar jointing. This happens when a pool of magma cools at just the right rate so that as its surface contracts, it cracks into polygonal plates. The cracks accelerate the cooling, extending the cracks vertically, thereby forming columns.

A note from 1911 made a description of the cape:

So named from D'Entrecasteaux's pilot. Flinders called it Basaltic Cape, but only prior to the publication of the maps of the French expedition. "In 1814 Flinders very honestly (writes Comte deFleurieu) replaces on his map the name of Raoull, stating that he gave up the name of Basaltic. This notwithstanding, Scott, Cross, and Arrowsmith chart it as Raoull or Basaltic.

All content from Kiddle encyclopedia articles (including the article images and facts) can be freely used under Attribution-ShareAlike license, unless stated otherwise. Cite this article:
Cape Raoul Facts for Kids. Kiddle Encyclopedia.