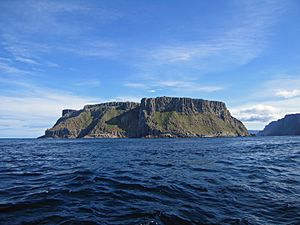 Tasman Island, with the Tasman peninsula in the background. 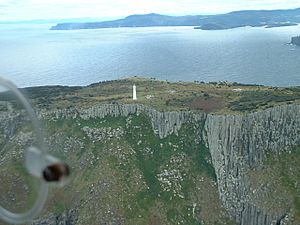 The lighthouse, and the cottages of its keepers

Tasman Island is a small island in south-eastern Australia. It is part of Tasmania. It has an area of 1.2 square kilometres (0.46 sq mi), and consists of a plateau surrounded by steep cliffs. The plateau is about 280 metres (920 ft) above sea level, the highest point on the island is about 300 metres (980 ft) above sea level. In 1905, a lighthouse was built on the island; there is also a weather station. Since 1977, the lighthouse is automatic, and no longer requires people to be on the island. The island is named after Abel Tasman. It is part of Tasman National Park today.

All content from Kiddle encyclopedia articles (including the article images and facts) can be freely used under Attribution-ShareAlike license, unless stated otherwise. Cite this article:
Tasman Island Facts for Kids. Kiddle Encyclopedia.