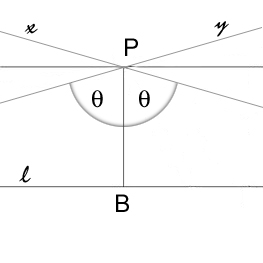 Lines through a given point P and asymptotic to line l. 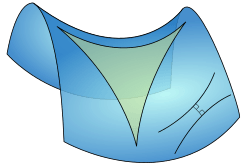 Because there is no hyperbolic analogue to Euclidean parallel lines, the hyperbolic use of parallel and related terms varies among writers. In this article, the two limiting lines are called asymptotic and lines that have a common perpendicular are called ultraparallel; the simple word parallel may apply to both.

An interesting property of hyperbolic geometry follows from the occurrence of more than one parallel line through a point P: there are two classes of non-intersecting lines. Let B be the point on l such that the line PB is perpendicular to l. Consider the line x through P such that x does not intersect l, and the angle θ between PB and x counterclockwise from PB is as small as possible; i.e., any smaller angle will force the line to intersect l. This is called an asymptotic line in hyperbolic geometry. Symmetrically, the line y that forms the same angle θ between PB and itself but clockwise from PB will also be asymptotic. x and y are the only two lines asymptotic to l through P. All other lines through P not intersecting l, with angles greater than θ with PB, are called ultraparallel (or disjointly parallel) to l. Notice that since there are an infinite number of possible angles between θ and 90 degrees, and each one will determine two lines through P and disjointly parallel to l, there exist an infinite number of ultraparallel lines.

Thus we have this modified form of the parallel postulate: In hyperbolic geometry, given any line l, and point P not on l, there are exactly two lines through P which are asymptotic to l, and infinitely many lines through P ultraparallel to l.

In Euclidean geometry, the angle of parallelism is a constant; that is, any distance

function. This function, described by Nikolai Ivanovich Lobachevsky, produces a unique angle of parallelism for each distance

. As the distance gets shorter,

approaches 90°, whereas with increasing distance

approaches 0°. Thus, as distances get smaller, the hyperbolic plane behaves more and more like Euclidean geometry. Indeed, on small scales compared to

is the (constant) Gaussian curvature of the plane, an observer would have a hard time determining whether he is in the Euclidean or the hyperbolic plane.

The term "hyperbolic geometry" was introduced by Felix Klein in 1871. For more history, see article on non-Euclidean geometry.

Models of the hyperbolic plane 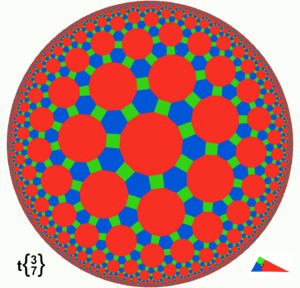 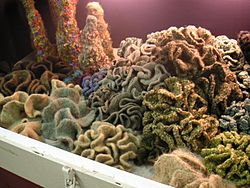 A collection of crocheted hyperbolic planes, in imitation of a coral reef, by the Institute For Figuring

M. C. Escher's famous prints Circle Limit III and Circle Limit IV illustrate the conformal disc model quite well. In both one can see the geodesics. (In III the white lines are not geodesics, but hypercycles, which run alongside them.) It is also possible to see quite plainly the negative curvature of the hyperbolic plane, through its effect on the sum of angles in triangles and squares.

In the Euclidean plane, their angles would sum to 450°; i.e., a circle and a quarter. From this we see that the sum of angles of a triangle in the hyperbolic plane must be smaller than 180°. Another visible property is exponential growth. In Circle Limit IV, for example, one can see that the number of angels and demons within a distance of n from the center rises exponentially. The demons have equal hyperbolic area, so the area of a ball of radius n must rise exponentially in n.

There are several ways to physically realize a hyperbolic plane (or approximation thereof). A particularly well-known paper model based on the pseudosphere is due to William Thurston. The art of crochet has been used to demonstrate hyperbolic planes with the first being made by Daina Taimina. In 2000, Keith Henderson demonstrated a quick-to-make paper model dubbed the "hyperbolic soccerball".

All content from Kiddle encyclopedia articles (including the article images and facts) can be freely used under Attribution-ShareAlike license, unless stated otherwise. Cite this article:
Hyperbolic geometry Facts for Kids. Kiddle Encyclopedia.