János Bolyai (15 December 1802 – 27 January 1860) or Johann Bolyai, was a Hungarian mathematician, one of the founders of non-Euclidean geometry — a geometry that differs from Euclidean geometry in its definition of parallel lines. The discovery of a consistent alternative geometry that may correspond to the structure of the universe helped to free mathematicians to study abstract concepts regardless of any possible connection with the physical world. 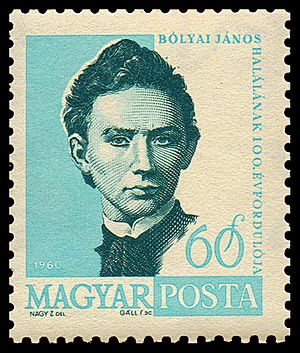 He was an accomplished polyglot speaking nine foreign languages, including Chinese and Tibetan. He learned the violin and performed in Vienna.

No original portrait of Bolyai survives. An unauthentic picture appears in some encyclopedias and on a Hungarian postage stamp.

He left more than 20,000 pages of mathematical manuscripts when he died. These can now be found in the Teleki-Bolyai Library in Marosvásárhely (today Târgu Mureş), where Bolyai died.

The Babeş-Bolyai University in Cluj-Napoca, that was established in 1959, bears his name, as does the crater Bolyai on the Moon and the János Bolyai Mathematical Institute at the University of Szeged.

Furthermore, 1441 Bolyai, a minor planet discovered in 1937, is named after him; and many primary and secondary schools in the Carpathian Basin bear his name. A street in Budapest, Hungary and another one in Temesvár, Romania is also named after him. The professional society of Hungarian mathematicians also bears his name. There is also a mathematical award given out every five years named the Bolyai Prize.

All content from Kiddle encyclopedia articles (including the article images and facts) can be freely used under Attribution-ShareAlike license, unless stated otherwise. Cite this article:
János Bolyai Facts for Kids. Kiddle Encyclopedia.