An example of Non-Euclidian geometry can be seen by drawing lines on a ball or other round object, straight lines that are parallel at the equator can meet at the poles 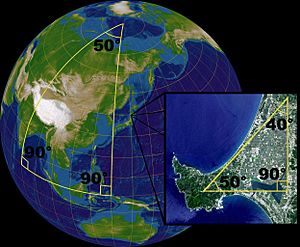 The first authors of non-Euclidean geometries were the Hungarian mathematician János Bolyai and the Russian mathematician Nikolai Ivanovich Lobachevsky, who separately published treatises on hyperbolic geometry around 1830. Others, such as Carl Friedrich Gauss, had earlier ideas, but did not publish their ideas at the time.

All content from Kiddle encyclopedia articles (including the article images and facts) can be freely used under Attribution-ShareAlike license, unless stated otherwise. Cite this article:
Non-Euclidean geometry Facts for Kids. Kiddle Encyclopedia.