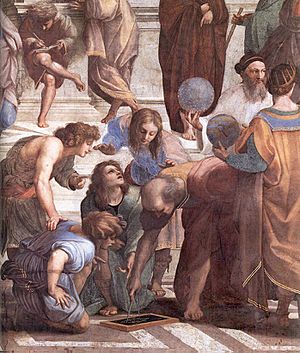 Detail from Raphael's The School of Athens featuring a Greek mathematician – perhaps representing Euclid or Archimedes – using a compass to draw a geometric construction.

Euclidean geometry is a system in mathematics. People think Euclid was the first person who described it; therefore, it bears his name. He first described it in his textbook Elements. The book was the first systematic discussion of geometry as it was known at the time. In the book, Euclid first assumes a few axioms. These form the base for later work. They are intuitively clear. Starting from those axioms, other theorems can be proven.

In the 19th century other forms of geometry were found. These are non-Euclidean geometry. Carl Friedrich Gauss, János Bolyai, and Nikolai Ivanovich Lobachevsky were some people that developed such geometries. Very often, these do not use the parallel postulate, but the other four axioms.

Euclid makes the following assumptions. These are axioms, and need not be proved.

All content from Kiddle encyclopedia articles (including the article images and facts) can be freely used under Attribution-ShareAlike license, unless stated otherwise. Cite this article:
Euclidean geometry Facts for Kids. Kiddle Encyclopedia.