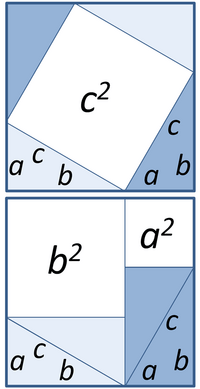 The Pythagorean theorem has at least 370 known proofs.

A theorem is a proven idea in mathematics. Theorems are proved using logic and other theorems that have already been proved. A minor theorem that one must prove to prove a major theorem is called a lemma. Theorems are made of two parts: hypotheses and conclusions.

Theorems use deduction, in contrast to theories which are empirical.

Some theorems are trivial, since they directly follow from the propositions. Other theorems are called "deep", because their proof is long and difficult. Sometimes, such proofs involve other areas of mathematics or show connections between different areas. A theorem might be simple to state and yet be deep. An excellent example is Fermat's Last Theorem, and there are many other examples of simple yet deep theorems in number theory and combinatorics (among other areas).

There are other theorems for which a proof is known, but cannot be easily written down. Among the best examples are the four color theorem and the Kepler conjecture. Both of these theorems are only known to be true by reducing them to a computational search which is then verified by a computer program. At first, many mathematicians did not accept this form of proof, but it has become more widely accepted over the years. The mathematician Doron Zeilberger has even gone so far as to claim that these are possibly the only nontrivial results that mathematicians have ever proved. Many mathematical theorems can be reduced to simpler computations, including polynomial identities, trigonometric identities and hypergeometric identities.

All content from Kiddle encyclopedia articles (including the article images and facts) can be freely used under Attribution-ShareAlike license, unless stated otherwise. Cite this article:
Theorem Facts for Kids. Kiddle Encyclopedia.