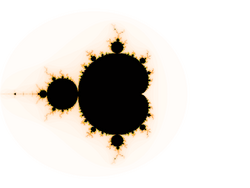 The Mandelbrot set can be explained with the equation zn+1 = zn2 + c. In that equation, c and z are complex numbers and n is zero or a positive integer (natural number). Starting with z0=0, c is in the Mandelbrot set if the absolute value of zn never becomes larger than a certain number (that number depends on c), no matter how large n gets.

Mandelbrot was one of the first to use computer graphics to create and display fractal geometric images, leading to his discovering the Mandelbrot set in 1979. That was because he had access to IBM's computers. He was able to show how visual complexity can be created from simple rules. He said that things typically considered to be "rough", a "mess" or "chaotic", like clouds or shorelines, actually had a "degree of order". The equation zn+1 = zn2 + c was known long before Benoit Mandelbrot used a computer to visualize it.

The shape of the Mandelbrot Set is represented in black in the image on this page.

When graphed to show the entire Set, the resultant image is striking, pretty, and quite recognizable.

Multibrot is a generalization that allows any exponent: zn+1 = znd + c. These sets are called Multibrot sets. The Multibrot set for d = 2 is the Mandelbrot set.

All content from Kiddle encyclopedia articles (including the article images and facts) can be freely used under Attribution-ShareAlike license, unless stated otherwise. Cite this article:
Mandelbrot set Facts for Kids. Kiddle Encyclopedia.