Graphics (from Greek γραφικός) are visual presentations on some surface, such as a wall, canvas, computer screen, paper, or stone. It includes everything that relates to creation of signs, charts, logos, graphs, drawings, symbols, geometric designs and so on.

Graphic design is the art or profession of combining text and pictures in art, advertisements, publications, or websites. The aim of graphics is to brand, inform, and have a specific effect on its audience.

Hundreds of graphic designs of animals were made by primitive people in Chauvet cave, in the south of France, about 30,000 BC. Also, similar art was done in the Lascaux cave, France, about 14,000 BC. The art of primitive hunters is found in the rocks of Bhimbetka in India, drawn earlier than 7000 BC. Aboriginal rock art in Kakadu National Park of Australia, show that graphics has a long history in many parts of the world. This history (with writing, which emerged in 3000–4000 BC) are the foundation of graphic art.

Religious books have used graphics extensively. Among these books are Bibles that were created in the monasteries in Ireland, Scotland, and England. Spiralling and interlocking patterns, often including small figures, were part of the ancient graphic tradition of the British Isles. From the 6th century onwards these were applied to the decoration of illuminated gospels.

Graphics in the Quran

In Islamic countries the graphic designs can be found in their holy book, the Quran. The Quran was first wriiten an angled style called Kufi. This appeared in the 8th century, and reached its peak in the 10th century. Later on decoration of margin, page and other graphic techniques were added to beautify the book. In the 12th century the Naskh script was invented: it used curves instead of angled lines. Other styles were added later on.

From ancient times graphic design has been used for decoration of pottery and ceramics.

William Morris had an influence on modern graphics. In the second half of 19th century his Kelmscott Press produced many graphic designs, and created a collector market for this kind of art. In Oxford he was associated with artists like Burne-Jones, and Dante Gabriel Rossetti. They formed the Pre-Raphaelites group, whose ideas influenced modern graphic design considerably.

The Dutch painter Piet Mondrian in the years 1920–21 courageously introduced the style of minimalism in painting. His simple geometric compositions, together with the use of only three basic colors, blue, yellow, and red, in combination with black and white created a new venue for the graphic designers. He demonstrated that with simple relocation of these colors, and experimenting with the proportionality of various square surfaces, one can achieve extremely different ambiances and various feelings. For the graphic designers who intend to convey a message with a minimum interference from the extraneous elements his experiment in minimalism was a valuable gift. 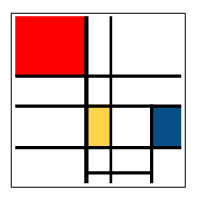 A trademark, identified by the symbols ™ and ®, or mark is a distinctive sign or indicator used by an individual, company or other entity to identify its products or services and to distinguish them from those of other producers. A trademark is a type of intellectual property, and typically a name, word, phrase, logo, symbol, design, image, or a combination of these elements.

Signs of culture and peace

In 1921, Otto Neurath, an Austrian social scientist, introduced graphic design to help the understanding of social and economical data. In 1925, the Museum of Economy and Society used such graphics for the public. This style of presentation at the time was called the Viennese method, but now it is known as Isotype charts.

Placards and posters existed from ancient times. The Greek axons and the Roman Albums, with their decorative designs and announcements, were quite similar to today's posters. In ancient Greece the names of athletes and games schedules were written on columns that were slowly turning on an axis. Romans used whitewashed walls in their markets in which sellers, money lenders, and slave traders wrote their announcements and advertised for their products, and to attract the attention of customers they added an attractive design.

With the invention of printing, in 1440, and particularly the development of the lithographic process, invented by a Czech named Alois Senefelder in 1798 in Austria, creation of posters became feasible. Although handmade posters existed before, they were mainly used for government announcements. William Caxton, who in 1477 started a printing company in England, produced the first printed poster.

In 1870, the advertising poster emerged.

After the Second World War, with the emergence of new color printing technology and particularly appearance of computers, the art of posters underwent a new revolutionary phase. People can create color posters on their laptop computers and create color prints at a very low cost. Unfortunately, the high cost of sophisticated printing processes can only be afforded mostly by government entities and large corporations. With the emergence of the internet, the role of posters in conveying information has greatly diminished. However, some artists still use chromolithography in order to create works of art in the form of print. In this regard the difference between painting and print has been narrowed considerably.

Today graphic design has penetrated into all aspects of modern life. In particular modern architecture has been influenced by graphics.

All content from Kiddle encyclopedia articles (including the article images and facts) can be freely used under Attribution-ShareAlike license, unless stated otherwise. Cite this article:
History of graphic design Facts for Kids. Kiddle Encyclopedia.