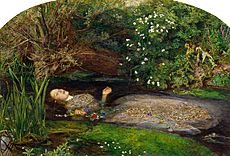 Ophelia by Millais; Elizabeth Siddal is the model

The Pre-Raphaelite Brotherhood (also known as the Pre-Raphaelites) was a group of English painters, poets, and critics, founded in 1848 by William Holman Hunt, John Everett Millais and Dante Gabriel Rossetti. The three founders were soon joined by William Michael Rossetti, James Collinson, Frederic George Stephens and Thomas Woolner to form a seven-member "brotherhood". After they had broken up, John William Waterhouse painted in their style. Their influence shrank as the impressionists and post-impressionists became more important.

The group's intention was to reform art by rejecting what they considered to be the 'mechanistic approach'. This was first adopted by the Mannerist artists who succeeded Raphael and Michelangelo. The Brotherhood believed that the Classical poses and elegant compositions of Raphael in particular had been a corrupting influence on the academic teaching of art. So, they are called Pre-Raphaelites.

In particular, they objected to the influence of Sir Joshua Reynolds, the founder of the English Royal Academy of Arts, whom they called "Sir Sloshua". To the Pre-Raphaelites, according to William Michael Rossetti, "sloshy" meant "anything lax or scamped in the process of painting ... and hence ... any thing or person of a commonplace or conventional kind". In contrast, they wanted to return to the abundant detail, intense colours, and complex compositions of Quattrocento Italian and Flemish art.

The Pre-Raphaelites continued to accept the idea of history painting, and the imitation of nature, as central to the purpose of art. Despite this, they were a reform movement: they created a distinct name for their form of art, and published a periodical, The Germ, to promote their ideas. Their debates were recorded in the Pre-Raphaelite Journal.

The Brotherhood were highly praised by the art critic John Ruskin, and in turn they were influenced by his ideas. Rossetti's wife Elizabeth Siddal was their favourite model, and she developed into an excellent artist herself.

All content from Kiddle encyclopedia articles (including the article images and facts) can be freely used under Attribution-ShareAlike license, unless stated otherwise. Cite this article:
Pre-Raphaelite brotherhood Facts for Kids. Kiddle Encyclopedia.