The Walker Art Gallery is an art gallery in Liverpool, which houses one of the largest art collections in England, outside London. It is part of the National Museums Liverpool group, and is promoted as "the National Gallery of the North" because it is not a local or regional gallery but is part of the national museums and galleries administered directly from central government funds.

History of Gallery and origins of the collection 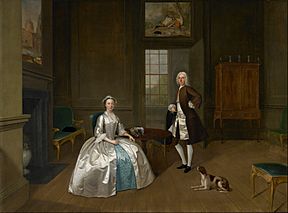 The Walker Art Gallery's collection dates from 1819 when the Liverpool Royal Institution acquired 37 paintings from the collection of William Roscoe, who had to sell his collection following the failure of his banking business, though it was saved from being broken up by his friends and associates.

The collection grew over the following decades: in 1851 Liverpool Town Council bought Liverpool Academy’s diploma collection and further works were acquired from the Liverpool Society for the Fine Arts, founded in 1858. The competition between the Academy and Society eventually led to both collapsing.

William Brown Library and Museum opened in 1860, named after a Liverpool merchant whose generosity enabled the Town Council to act upon an 1852 Act of Parliament which allowed the establishment of a public library, museum and art gallery, and in 1871 the council organised the first Liverpool Autumn Exhibition, held at the new library and museum.

The success of the exhibition enabled the Library, Museum and Arts Committee to purchase works for the council’s permanent collection, buying around 150 works between 1871 and 1910. Works acquired included WF Yeames’ And when did you last see your father? and Rossetti’s ‘Dante’s Dream’.

Foundation and development of the gallery 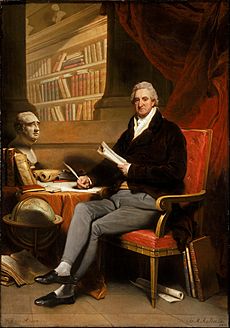 Designed by local architects Cornelius Sherlock and H. H. Vale, the Walker Art Gallery was opened on 6 September 1877 by Edward Henry Stanley, 15th Earl of Derby. It is named after its founding benefactor, Sir Andrew Barclay Walker (1824–1893), a former mayor of Liverpool and wealthy brewer born in Ayrshire who expanded the family business to England and moved to live in Gateacre.

In 1893, the Liverpool Royal Institution placed its collection on long-term loan to the gallery and in 1948 presented William Roscoe's collection and other works. This occurred during post-war reconstruction when the gallery was closed, re-opening in 1951. During the Second World War the gallery was taken over by the Ministry of Food and the collection was dispersed for safety.

In 1986, the gallery achieved national status, as part of the National Museums and Galleries on Merseyside. 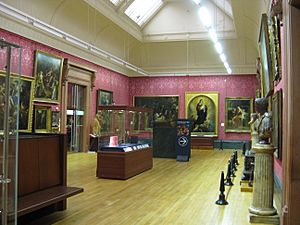 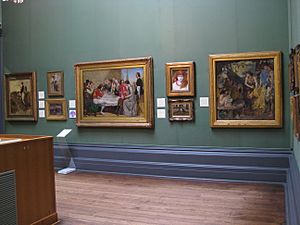 Part of the Pre-Raphaelite Collection 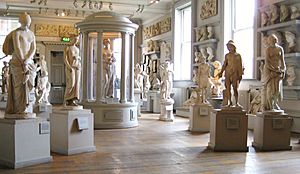 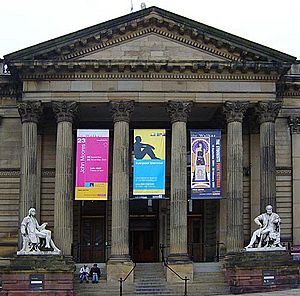 Front of the museum

The Walker's collection includes Italian and Netherlandish paintings from 1300–1550, European art from 1550–1900, including works by Giambattista Pittoni, Rembrandt, Poussin and Degas, 18th and 19th-century British art, including a major collection of Victorian painting and many Pre-Raphaelite works, a wide collection of prints, drawings and watercolours, 20th-century works by artists such as Lucian Freud, David Hockney and Gilbert and George and a major sculpture collection. The select collection of minor or decorative arts covers a wide range, from Gothic ivories to British ceramics up to the present day.

The first John Moores Contemporary Painting Prize exhibition was held in 1957. Sponsored by Sir John Moores, founder of Littlewoods, the competition has been held every two years ever since and is the biggest painting prize in the UK.

There is a regular programme of temporary exhibitions which in 2009-10 has included Aubrey Williams, Bridget Riley, Sickert and Freud.

In 2004, the gallery staged The Stuckists Punk Victorian, the first national museum exhibition of the Stuckist art movement. The Gallery also takes part in the Liverpool Biennial.

The gallery is located on William Brown Street (the only street in the UK to consist of nothing other than museums, galleries and libraries) in a neo-Classical building.

On 17 December 2011, the Walker Art Gallery got a new addition to its collection - a statue of a priest vandalised by Banksy. The renowned graffiti artist has sawn off the face of an 18th-century replica stone bust and glued on a selection of bathroom tiles. The resulting 'pixellated' portrait is entitled 'Cardinal Sin' and is believed to be a comment on the abuse scandal in the Church and its subsequent cover-up. This piece of art is displayed in Room three, which is one of the 17th-century Old Master galleries.

As of 2 July 2013, the La Masseuse sculpture by Edgar Degas, previously owned by Lucian Freud, found a permanent home at the Walker Art Gallery, thanks to the donation-in-payment system put in place by the Arts Council England.

All content from Kiddle encyclopedia articles (including the article images and facts) can be freely used under Attribution-ShareAlike license, unless stated otherwise. Cite this article:
Walker Art Gallery Facts for Kids. Kiddle Encyclopedia.