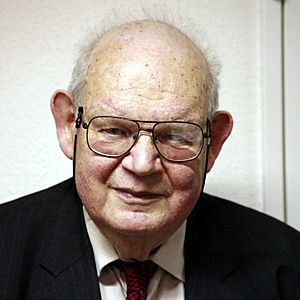 Benoît B. Mandelbrot (20 November 1924 – 14 October 2010) was a Polish-French-American mathematician. Mandelbrot was born in Warsaw into a Jewish-Lithuanian family. He is best known for his works with fractal geometry. He lived and worked until his death in the United States. He was a professor at the University of Yale.

Mandelbrot was born in Warsaw, Poland. His family lived in France under German occupation. He died of pancreatic cancer at the age of 85 in Cambridge, Massachusetts.

His most known development is the Mandelbrot set, which he discovered and described in 1979. 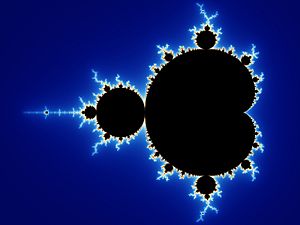 A picture of the Mandelbrot set.

All content from Kiddle encyclopedia articles (including the article images and facts) can be freely used under Attribution-ShareAlike license, unless stated otherwise. Cite this article:
Benoît Mandelbrot Facts for Kids. Kiddle Encyclopedia.