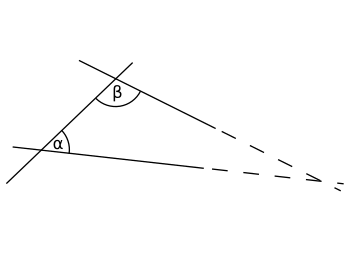 If the sum of the inner angles α (alpha) and β (beta) is less than 180°, the two lines will intersect somewhere, if both are prolonged to infinity.

The postulate says that:

if you cut a line segment with two lines, and the two interior angles the lines form add up to less than two right angles, then the two lines will eventually meet if you extend them long enough.

Some mathematicians thought that Euclid's fifth postulate was much longer and more complicated than the other four postulates. Many of them thought that it could be proven from the other simpler axioms. Some mathematicians announced they had proven the proposition from the simpler propositions, but they all turned out to be mistaken. Euclid is also known as Euclid of Alexandria.

Another more recent proposition known as Playfair's axiom is similar to Euclid's fifth postulate. It says that:

In fact, mathematicians found out that this axiom is not only similar to Euclid's fifth postulate, but has exactly the same implications. Mathematically, the two propositions are called 'equivalent' propositions. Today Playfair's axiom is used more often by mathematicians than Euclid's original parallel postulate.

Euclidean, elliptical and hyperbolic geometry. The Parallel Postulate is satisfied only for models of Euclidean geometry.

Mathematicians found that when they replaced Euclid's fifth postulate with this axiom, they were still able to prove many of Euclid's other theorems. This formed a new geometry called elliptic geometry.

One way to imagine elliptic geometry is by thinking of the surface of a globe. On a globe, lines of longitude appear to be parallel at the equator, but they all meet at the poles.

Given a straight line and a point not on this line, you can draw at least two straight lines through this point that will not eventually cross the other straight line.

This is called hyperbolic geometry.

Another geometry simply removes Euclid's fifth postulate and does not replace it with anything. This is called neutral geometry or absolute geometry.

All content from Kiddle encyclopedia articles (including the article images and facts) can be freely used under Attribution-ShareAlike license, unless stated otherwise. Cite this article:
Parallel postulate Facts for Kids. Kiddle Encyclopedia.