The flag of the U.S. state of New Mexico consists of a red sun symbol of the Zia people on a field of gold (yellow), and was officially introduced in 1925. It was designed in 1920, to highlight the state's Native American Pueblo and Nuevo México Hispano roots. The symbology is designed to represent the Puebloans and the colors of the flag of Spain. 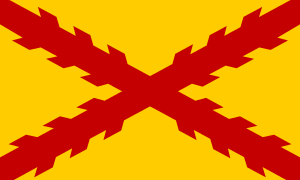 The Cross of Burgundy flag (which is shown here with yellow background, flag of the Spanish Empire during the reign of Philip II of Spain (1556-1598)) served as the flag of the Spanish viceroys in the New World. New Mexico's flag uses similar colors.

The Daughters of the American Revolution pushed New Mexico to design a contemporary and unique flag in 1920. A contest to design the new state flag was won by Harry Mera of Santa Fe, New Mexico. Mera was an archaeologist who was familiar with the Zia Sun symbol found at Zia Pueblo on a 19th-century pot. The symbol has sacred meaning to the Zia. Four is a sacred number which symbolizes the Circle of Life: the four directions, the four times of day, the four stages of life, and the four seasons. The circle binds the four elements of four together. His winning design is the flag that the state uses today. The salutation, “I salute the flag of the State of New Mexico and the Zia symbol of perfect friendship among united cultures," is commonly recited in New Mexico public schools after the United States pledge of allegiance. 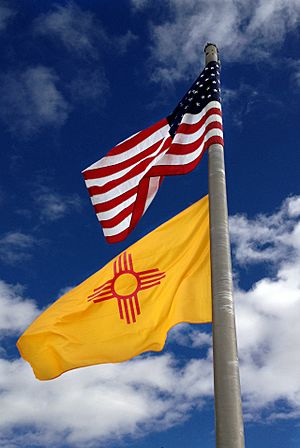 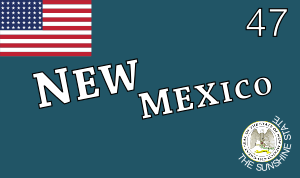 A digital reproduction of New Mexico's historical state flag, unofficially in use from 1912 to 1925.

For the first 14 years of statehood, New Mexico had no official flag. During the San Diego World's Fair of 1915, the fair featured an exhibit hall in which all the state flags were displayed. Since New Mexico did not have an official flag, an unofficial flag was displayed, consisting of a blue field with the United States flag in the upper left corner, the words "New Mexico" and "47" (because New Mexico is the 47th state) in silver lettering in the center of the flag, and the state seal in the bottom right corner. Some historical references (including Cram's Unrivaled Atlas of the World) also show the words "The Sunshine State" wrapped around the seal in the lower right corner.

That a flag be and the same is hereby adopted to be used on all occasions when the state is officially and publicly represented, with the privilege of use by all citizens upon such occasions as they may deem fitting and appropriate. Said flag shall be the ancient Zia sun symbol of red in the center of a field of yellow. The colors shall be the red and yellow of old Spain. The proportion of the flag shall be a width of two-thirds its length. The sun symbol shall be one-third of the length of the flag. Said symbol shall have four groups of rays set at right angles; each group shall consist of four rays, the two inner rays of the group shall be one-fifth longer than the outer rays of the group. The diameter of the circle in the center of the symbol shall be one-third of the width of the symbol. Said flag shall conform in color and design described herein.

The pledge to the state flag is available in English and Spanish:

I salute the flag of the state of New Mexico, the Zia symbol of perfect friendship among united cultures.

New Mexico has the best-designed flag of any U.S. state, territory or Canadian province, according to a 2001 survey by the North American Vexillological Association.

All content from Kiddle encyclopedia articles (including the article images and facts) can be freely used under Attribution-ShareAlike license, unless stated otherwise. Cite this article:
Flag of New Mexico Facts for Kids. Kiddle Encyclopedia.