Pueblo of Isleta facts for kids 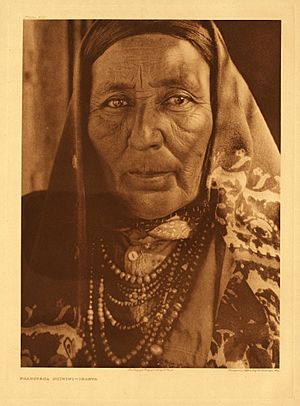 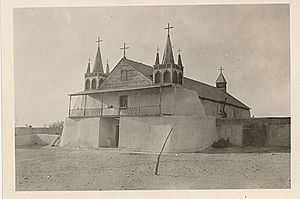 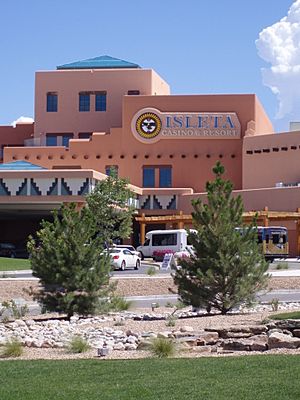 Pueblo of Isleta is located in the Middle Rio Grande Valley, 13 miles (21 km) south of Albuquerque. It is adjacent to and east of the main section of Laguna Pueblo. The pueblo was built on a knife-shaped reef of lava running across an ancient Rio Grande channel. The Isleta Pueblo Historic District is listed on the National Register of Historic Places.

On January 15, 2016, the tribe's officials and federal government representatives held a ceremony to mark the government's taking into federal trust some 90,151 acres of land, 140 square miles, which the Pueblo had purchased. It enlarged their communal territory by 50%. The tribe had worked for more than 20 years to acquire this land, once part of their homeland. It is so far the largest such acquisition handled under the President Barack Obama administration.

The population of Pueblo of Isleta consists of mostly the Southern Tiwa ethnic group (Spanish: Tigua.). They speak Isletan Tiwa, one of the two varieties or dialects of the Southern Tiwa language, part of the Tanoan language family. The other variety is spoken at Sandia Pueblo.

In August 2015, the tribe announced that the Tiwa language would be taught to children at Isleta Elementary School, following the school's transfer from federal to tribal control. In 2016 the Kellogg Foundation made grants totaling $148,000 for development of the dual language, Tiwa-English program, for young children at the school.

Isleta (and the Sandia) have matrilineal kinship systems, with descent and inheritance traced through the mother's family; the children are considered born to her people and receive their status from her family or corn group, akin to a clan. They have an endogamous system of marriage. These kinship and cultural divisions are connected with the sacred directions and colors, as well as tribal lineages, clans, phratries, moieties. In the matrimonial moiety system, one moiety is connected with the winter, and the other with the summer. The tribe maintains and operates a kiva as sacred space for particular rituals and ceremonies.

In the early 20th century, the tribe was headed by a cacique, selected by elders from a clan with hereditary rights. In addition, the tribe annually elected a governor and assistants. The governor acted as a judge in civil cases; criminal cases were turned over to the federal government. The grand council was made up of all the chiefs, leaders of the pueblo who had gained popular respect. There were distinctions between peace chiefs and those leaders appointed in war.

Kachina cults are found in Isleta. They may have adopted this cult from the Laguna people of the Western Pueblos, who have historically practiced such cults for a longer period.

Father Anton Docher, a French Catholic priest serving for decades at the Pueblo church, described the community in a 1913 article in The Santa Fé Magazine:

A Cacique appointed for life, has the supreme power over his subjects. A governor is elected yearly by the people with two assistants, and occasionally a grand council meets. The governor is the judge in civil cases only (crimes are turned over to the district courts). A war captain and other officials have charge of the various celebrations and dances, such as the "dance of the kings" in January, the "tortoise dance" in February...

This historic tribal government was fully recognized by the United States government.

The native name of the pueblo is Shiewhibak (Shee-eh-whíb-bak) meaning "a knife laid on the ground to play whib, a native footrace.

When the Spanish arrived in the late 1500s they named the village Isleta, Spanish for "little island". The Spanish Mission of San Agustín de la Isleta was built in the pueblo around 1629 or 1630 by the Spanish Franciscan friar Juan de Salas. He tried to teach the people about Catholicism and western ways of cultivating plants.

During the Pueblo Revolt of 1680, many of the pueblo people fled to Hopi settlements in Arizona, while others followed the Spanish retreat south to El Paso del Norte (present-day El Paso, Texas. After the rebellion, the Isleta people returned to the Pueblo, many with Hopi spouses.

In the 1800s, friction with members of Laguna Pueblo and Acoma Pueblo, who had joined the Isleta community, led to the founding of the satellite settlement of Oraibi. In the 21st century, Isleta includes the main pueblo, as well as the small communities of Oraibi and Chicale.

On October 21, 1887, the French missionary Father Anton Docher traveled to New Mexico, where he was assigned as a priest in the Cathedral of Santa Fé. After three years in Santa Fé and one in Taos, he was assigned to Isleta, arriving on December 28, 1891. There, he met Adolph Bandelier and Charles Fletcher Lummis, who became long-term friends. Young Pablo Abeita (no relation to Diego or Louise Abeita) had recently been selected as Governor of Isleta, continuing into the 1930s.

Father Anton Docher served for 34 years in the historic St. Agustin Mission Church until his death in 1928. He is buried near the previous priest, Padre Padilla, near the altar of the church in Isleta. (Built by the Tiwa under direction of a Spanish missionary in 1612, the church is one of the oldest in the United States.)

On October 26, 1919, the King of Belgium Albert I, together with Queen Elisabeth of Belgium and Prince Léopold, journeyed to Isleta during their official visit to the United States. The King decorated Pablo Abeita, Governor of the Pueblo, and Father Anton Docher with the Order of Léopold. Abeita gave the king a turquoise cross mounted in silver made by the Isletans. 10,000 people journeyed to Isleta for this grand visit by European royalty.

Abeita was appointed by the tribe to the Council of All Indian Pueblos, which was active in the 1920s to resist United States government political takeover of its lands. The Pueblo had an unusual land title, as the Spanish had a tradition of affirming indigenous title. When the United States took over the Southwest in 1848 following the Mexican War, it promised by treaty to preserve Spanish-Mexican titles. Abeita and other Pueblo leaders organized to raise awareness of these terms; they gained passage of the Pueblo Lands Act of 1924 by the US Congress, which affirmed their indigenous title.

But, through takeovers by Europeans and the United States, the Pueblo continued to lose lands. Some land claims were affirmed by court cases through the 20th century (see Aboriginal title in New Mexico). Beginning in the late 20th century, the tribe's leaders have worked to buy back lands to re-establish their homeland territory.

In January 2016, the Secretary of Interior joined the Governor of the Pueblo to celebrate the federal government taking this large amount of acquired land into trust on behalf of the Pueblo. The addition of 90,151 acres {140 square miles} increased the Pueblo's territory by 50%. The land is primarily located within what is known as Comanche Ranch. It is one of the Pueblo's profitable businesses, where they run 1,000 head of cattle. They now control a total of more than 211,000 acres.

All content from Kiddle encyclopedia articles (including the article images and facts) can be freely used under Attribution-ShareAlike license, unless stated otherwise. Cite this article:
Pueblo of Isleta Facts for Kids. Kiddle Encyclopedia.