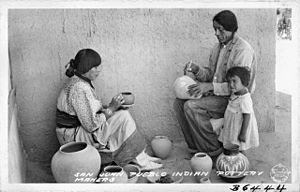 Ohkay Owingeh potters at work, 1937. Pottery making was historically important in the economy of San Juan, and continues today at Ohkay Owingeh.

Ohkay Owingeh was previously known as San Juan Pueblo until returning to its pre-Spanish name in November 2005. The Tewa name of the pueblo means "place of the strong people".

Ohkay Owingeh has the ZIP code 87566 and the U.S. Postal Service prefers that name for addressing mail, but accepts the alternative name San Juan Pueblo. This ZIP Code Tabulation Area (ZCTA) had a population of 3,357 at the 2000 Census. The entire pueblo has a population of 6,748.

The pueblo was founded around 1200 AD during the Pueblo III Era. By tradition, the Tewa people moved here from the north, perhaps from the San Luis Valley of southern Colorado, part of a great migration spanning into the Pueblo IV Era.

In March 1598, conquistador Oñate traveled from north central México, accompanied by a caravan of Catholic missionaries, a thousand soldiers, colonists, and Tlaxcalan Mexican Indians. The expedition included cattle, sheep, goats, oxen and horses, and arrived at Yungeh —Place of the Mockingbird—in present-day Ohkay Owingeh on July 11, 1598.

The people who met him that day, it is written[where?], were hospitable and offered Yuque Yunque pueblo as guest quarters to Oñate and his party. In royal gesture, he baptized and renamed Caypa pueblo (present-day Ohkay Owingeh) San Juan de los Caballeros, after his patron saint John the Baptist. He then established the first Spanish-Catholic capital of Santa Fe de Nuevo México at Yuque Yunque pueblo. In local history, it is said the event united the two fragmented families of Caypa and Yuque Yunque. Since their arrival from earlier homelands in the northwest, the two pueblos had been divided by the river, split until the expedition party's arrival. When the community offered Yuque Yunque pueblo on the west bank to Oñate, the two fragmented pueblos were made whole again at Caypa. The Spanish capital would be moved in 1610 to La Villa Real de la Santa Fe de San Francisco de Asís.

Popé was a local man who rose to be of the most regarded leaders of American Indian history. He would play a major role in the Pueblo revolt in 1680. The community was also formally known as the San Juan Indian Reservation.

Ohkay Owingeh is the headquarters of the Eight Northern Indian Pueblos Council, and the pueblo people are from the Tewa ethnic group of American Indians. It is one of the largest Tewa-speaking pueblos.

The annual Pueblo Feast Day is June 24. For all pueblos, the actual feast day includes a Catholic mass that is held in the morning. Because of historical relations with the Catholic Church, all pueblos have a church located near the center of the village. Most Pueblo people practice aspects of both the Catholic religion and Pueblo belief systems. The tribe owns the OhKay Casino and the Oke-Oweenge Crafts Cooperative, which showcases redware pottery, weaving, painting, and other artwork from the eight northern pueblos.

All content from Kiddle encyclopedia articles (including the article images and facts) can be freely used under Attribution-ShareAlike license, unless stated otherwise. Cite this article:
Ohkay Owingeh, New Mexico Facts for Kids. Kiddle Encyclopedia.