The Pueblo of Nambé has existed since the 14th century and is a member of the Eight Northern Pueblos. It was a primary cultural, economic, and religious center at the time of the arrival of Spanish colonists in the very early 17th century. Nambé was one of the Pueblos that organized and participated in the Pueblo Revolt of 1680, trying to expel the Spanish from the area.

The community of Nambe, New Mexico, is separate from the pueblo.

Nambé is the Spanish version of a similar-sounding Tewa word, which can be interpreted loosely as meaning "rounded earth." The word "pueblo" stems from the Spanish word for "village." Pueblo refers both to the Southwestern style architecture and the people themselves.

The Nambé's language is a dialect of the Tewa language.

Scholars believe that all Pueblo peoples are descended from the Anasazi, possibly from the Mogollón, and other ancient peoples. As the Anasazi abandoned their canyon homeland due to social upheaval and climate change, they migrated to other areas. Eventually the Nambé emerged as a culture in their new homeland in present-day New Mexico.

The Spanish conquistador Juan de Oñate arrived with armed forces in the area in 1598. He forced Nambé Pueblo, as was the case with other pueblos, to start paying him taxes with cotton, crops and labor. Catholic missionaries also came into the area, threatening native religious beliefs. They renamed pueblos with saints' names, and the first church was built in Nambé Pueblo in the early 1600s. The Spanish introduced new foods to the native communities, including peaches, peppers and wheat. In 1620 a royal decree assigned civil offices to each Pueblo. 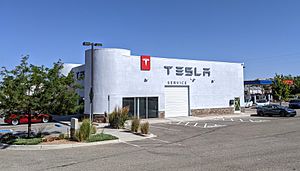 The people of Nambé Pueblo participate in a mixed economy, with many travelling to jobs outside of the Pueblo lands.

Prior to 2020, the Nambé operated a casino on tribal land at the Nambé Falls Travel Center. In 2021, Tesla opened a 7,000 sq ft (650 m2) service center on Nambé land to service Tesla vehicles, after signing an agreement with Nambé Pueblo leaders. This allowed the first service center to open in the State of New Mexico since state law prohibits automakers from selling direct to consumers, as Tesla does, and state law did not allow Tesla to open a service center without selling cars through intermediary car dealers.

All content from Kiddle encyclopedia articles (including the article images and facts) can be freely used under Attribution-ShareAlike license, unless stated otherwise. Cite this article:
Nambé Pueblo, New Mexico Facts for Kids. Kiddle Encyclopedia.