Picuris Pueblo ( Tiwa: P'įwweltha [p’ī̃wːēltʰà]) is a historic pueblo in Taos County, New Mexico, United States. It is also a census-designated place (CDP) and a federally recognized tribe of Native American Pueblo people. The 2010 census estimated that 68 people lived in the CDP, while 267 people in the U.S. reported being of the tribal group Picuris alone and 439 reported being of the tribal group Picuris alone or in combination with other groups. Picurís Pueblo is a member of the Eight Northern Pueblos. Their own name for their pueblo is P'įwweltha, meaning "mountain warrior place" or "mountain pass place." They speak the Picuris dialect of the Northern Tiwa language, part of the Kiowa-Tanoan language family.

The Pueblo of the Picuris is a federally recognized tribe, whose headquarters is in Peñasco, New Mexico. Their own name for their pueblo is Pinguiltha, meaning "mountain warrior place" or "mountain pass place." They speak the Picuris language, a dialect of the Northern Tiwa language, part of the Tanoan language family. Their tribal officers, led by a tribal governor, are elected every two years.

Located within the Pueblo are the San Lorenzo de Picurís church and the Picuris Pueblo Museum, which displays and sells the works of local weavers, potters and beadworkers. Picuris is particularly known for its micaceous pottery. Excavated dwellings are located within the pueblo. Self-guided tours and permits for photography within the pueblo are available to visitors. Visitors may fish for trout at Pu-La Lake by contacting the Picurís Pueblo Fish & Game and Parks & Wildlife. There are also picnic and campground facilities.

The Picuris people previously lived in an earlier, larger village of about 3,000 people now known as Pot Creek, near Taos. They migrated to the present location along the Rio Pueblo de Taos about 1250 CE. In the 15th century it was one of the largest Tiwa pueblos, influenced by Apache and other Plains Indian cultures, as was the Taos Pueblo.

In the late 17th century people from the pueblos of New Mexico revolted against the Spanish colonialists, particularly during a revolt between 1680 and 1696 when they fought for autonomy and their land. Following this period the people of the pueblo were dispersed and had abandoned their pueblo until 1706. At that time they joined with the Spanish to fight against attacks by Comanche and Apache tribes. Then, the Picuris pueblo people settled into a peaceful period. 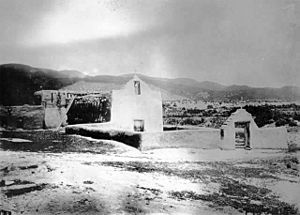 Spanish explorer Don Juan de Oñate named the pueblo "Pikuria" - which means "those who paint." The pueblo was influenced by the Spanish, particularly adoption of Christian religious practices and letting go of traditional rituals and ceremonies. The San Lorenzo de Picurís church was built of adobe by 1776 and was restored in the 21st century. Having been influenced by the Spanish and then the Americans for centuries, the Picuris adopted telephone and electrical services, paved roads and television. They resumed their traditional customs, which are performed throughout the year, and became self-governing again in the mid 1920s. The pueblo maintains a growing herd of buffalo.

In 1990, 147 of the 1,882 enrolled tribal members lived in the pueblo; however, the number was reduced to 86 in 2000. It is now one of the smallest Tiwa pueblos. Children attend school in a nearby town. Most of the adults are employed off of the reservation.

Their major feast day is San Lorenzo's Day on August 10, during which people of all ages engage in races and the Sunset Dance held on August 9. There are Corn Dances and Buffalo Dances in June and August, which may be private ceremonies. There are also dances held New Year's Day and in late January and early February that are open to the public.

An Arts & Crafts fair of weaving, sculpture, beadwork, and jewelry is held the first weekend in July.

Picuris Pueblo is located in northern New Mexico, on the western slopes of the Sangre de Cristo Mountains and 18 miles south of Taos Pueblo. Average elevation in the pueblo is over 7,000 feet.

According to the United States Census Bureau, the CDP has a total area of 0.4 square miles (1.0 km2), all land.

There were 38 households, out of which 10.5% had children under the age of 18 living with them, 21.1% were married couples living together, 13.2% had a female householder with no husband present, and 52.6% were non-families. 42.1% of all households were made up of individuals, and 13.2% had someone living alone who was 65 years of age or older. The average household size was 2.26 and the average family size was 3.33.

All content from Kiddle encyclopedia articles (including the article images and facts) can be freely used under Attribution-ShareAlike license, unless stated otherwise. Cite this article:
Picuris Pueblo, New Mexico Facts for Kids. Kiddle Encyclopedia.