Pojoaque ( Tewa: Pʼohsųwæ̨geh Ówîngeh/P'osuwaege Owingeh [p’òhsũ̀wæ̃̀gè ʔówîŋgè]), Po’su wae geh, which translates to “water gathering place”, is a census-designated place (CDP) in Santa Fe County, New Mexico, United States. It is part of the Santa Fe, New Mexico Metropolitan Statistical Area. The population was 1,907 at the 2010 census. Pojoaque Pueblo, a neighboring community, is an Indian Reservation, and the town of Pojoaque is a collection of communities near the pueblo with people from various ethnic backgrounds. The area of Pojoaque includes the neighborhoods of Cuyamungue, Jacona, Jaconita, Nambé and El Rancho.

Highway overpass at Pojoaque, “Po-suwae-geh,” or “the water drinking or gathering place.”

In the early 17th century the first Spanish mission San Francisco de Pojoaque was founded. During the Pueblo Revolt of 1680, Pojoaque was abandoned, and was not resettled until about 1706. By 1712 the population had reached 79. During the revolt of 1837, New Mexico native Manuel Armijo defeated of the rebels at Puertocito Pojoaque, east of Santa Cruz de la Cañada. In the early 1900s the Pojoaque Valley School District was established to serve the educational needs of the valley.

Pojoaque Pueblo is one of the six Tewa-speaking Rio Grande Pueblos, and a member of the Eight Northern Pueblos. The Pueblo was settled around 500 AD, with the population peaking in the 15th and 16th centuries.

In about 1900, a severe smallpox epidemic caused the pueblo to be abandoned once again by 1912. In 1934, Pojoaque Pueblo was reoccupied, and became a federally recognized Indian Reservation in 1936.

Pojoaque Pueblo remains a major employer in the region, owning several business enterprises, including the gaming operations of three casino locations, Buffalo Thunder Resort, Cities of Gold Casino and Jakes's Casino. As of 2015, the New Mexico state gaming compacts signed by the pueblo have expired, but the pueblo has continued gaming operations.

According to the United States Census Bureau, the CDP has a total area of 2.9 square miles (7.5 km²), all land. The Pojoaque River flows from the Sangre de Cristo Mountains from Nambé Lake westward where it flows into the Rio Grande. 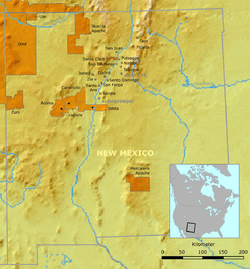 Location of Pojoaque Pueblo and neighboring pueblos in New Mexico

There were 493 households, out of which 38.3% had children under the age of 18 living with them, 46.7% were married couples living together, 13.0% had a female householder with no husband present, and 32.5% were non-families. 26.6% of all households were made up of individuals, and 6.9% had someone living alone who was 65 years of age or older. The average household size was 2.56 and the average family size was 3.10.

Pojoaque Pueblo opened the Poeh Museum in 1987, and the Cities of Gold Casino in the mid-1990s.

In 2008 the Pueblo opened the Buffalo Thunder resort and casino, New Mexico's largest and most expensive resort. The estimated cost for the resort project in 2004 was $250 million.

All content from Kiddle encyclopedia articles (including the article images and facts) can be freely used under Attribution-ShareAlike license, unless stated otherwise. Cite this article:
Pojoaque, New Mexico Facts for Kids. Kiddle Encyclopedia.