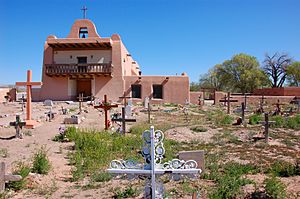 San Ildefonso Pueblo (Tewa: P'ohwhóge Owingeh [p’òhxʷógè ʔówîŋgè] "where the water cuts through") is a census-designated place (CDP) in Santa Fe County, New Mexico, United States, and a federally recognized tribe, established c. 1300 C.E. The Pueblo is self-governing and is part of the Santa Fe, New Mexico Metropolitan Statistical Area. The population was 524 as of the 2010 census, reported by the State of New Mexico as 1,524 in 2012, and there were 628 enrolled tribal members reported as of 2012 according to the Department of the Interior. San Ildefonso Pueblo is a member of the Eight Northern Pueblos, and the pueblo people are from the Tewa ethnic group of Native Americans, who speak the Tewa language. 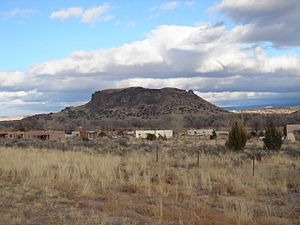 San Ildefonso Pueblo is located at the foot of Black Mesa.

The Pueblo was founded when people migrated from the Mesa Verde complex in Southern Colorado, by way of Bandelier (elevation about 7000 feet), just south of present-day Los Alamos, New Mexico. People thrived at Bandelier due to the rainfall and the ease of constructing living structures from the surrounding soft volcanic rock. But after a prolonged drought, the people moved down into the valleys of the Rio Grande around 1300 C.E. (Pueblo IV Era). The Rio Grande and other arroyos provided the water for irrigation. 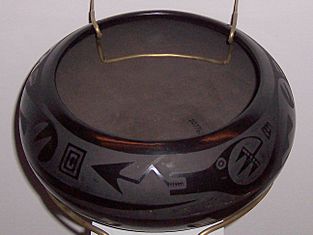 Black-on-Black pottery of the pueblo. Artifact at the Field Museum, Chicago

The people of San Ildefonso continued to lead an agricultural based economy until the early 20th century when Maria Martinez and her husband Julian Martinez rediscovered how to make the Black-on Black pottery for which San Ildefonso Pueblo would soon become famous. From that time the Pueblo has become more tourist-oriented, with numerous tourist shops existing in the Pueblo. Because of close proximity to the state capital, Santa Fe, and the presence of the Los Alamos National Laboratory, many of those employed in the pueblo have government jobs.

The people of San Ildefonso have a strong sense of identity and retain ancient ceremonies and rituals tenaciously, as well as tribal dances. While many of these ceremonies and rituals are closely guarded, San Ildefonso Feast Day is open to the public every January 23. Other dances open to the public include Corn Dance, which occurs in the early to mid-part of September, and dances at Easter.

All content from Kiddle encyclopedia articles (including the article images and facts) can be freely used under Attribution-ShareAlike license, unless stated otherwise. Cite this article:
San Ildefonso Pueblo, New Mexico Facts for Kids. Kiddle Encyclopedia.