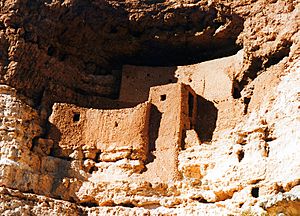 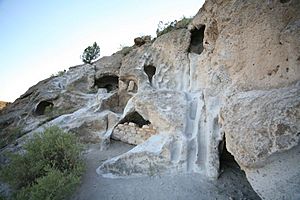 Cavates and pathways in soft tuff at Tsankawi, New Mexico

In archeology, cliff dwellings are dwellings formed by using niches or caves in high cliffs, with more or less excavation or with additions in the way of masonry.

Two special sorts of cliff dwelling are distinguished by archaeologists: the cliff-house, which is actually built on levels in the cliff, and the cavate, which is dug out, by using natural recesses or openings.

Rock-cut architecture generally refers to rather grander temples, but also tombs, cut into living rock, although for example the Ajanta Caves in India, of the 2nd century BCE to 5th century CE, probably housed several hundred Buddhist monks and are cut into a cliff, as are the Mogao Caves in China.

Some of the most famous cliff dwellings are those in North America, particularly among the canyons of the southwest, in Arizona, New Mexico, Utah, Colorado and Chihuahua in Mexico, some of which are still used by Native Americans. There has been considerable discussion as to their antiquity, but modern research finds no definite justification for assigning them to a distinct primitive race, or farther back than the ancestors of the modern Pueblo people. The area in which they occur coincides with that in which other traces of the Pueblo tribes have been found. The niches that were used are often of considerable size, occurring in cliffs to a thousand feet in height, and approached by rock steps or log ladders.

All content from Kiddle encyclopedia articles (including the article images and facts) can be freely used under Attribution-ShareAlike license, unless stated otherwise. Cite this article:
Cliff-dwelling Facts for Kids. Kiddle Encyclopedia.