The park covers 2,352 acres (9.52 km2) in the Black Mountain Ranch and Rancho Peñasquitos area of northern San Diego. The park offers numerous trails for hiking and biking, and boasts a variety of native animal and plant species.

The Black Mountain Open Space Park is home to a wide variety of animal species. Mammals include mule deer, bobcat, desert woodrat, and Pacific kangaroo rat, and many others. Among the more than 80 birds species that can be found in the park, rare birds like the California gnatcatcher, rufous-crowned sparrow, and northern harrier reside in the area. Reptiles include the red diamond rattlesnake and amphibians include the Pacific chorus frog and slender salamander. 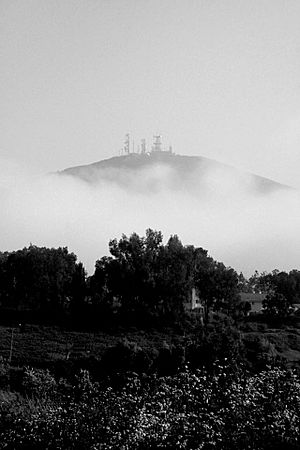 Tucked away in the Black Mountain canyon is an abandoned arsenic mine, accessible via pathways branching off of the park's Miner's Ridge Loop trail. The mine was established in the 1920s by Escondido rancher, rodeo cowboy, and actor Frank Hopkins, due to the demand for white arsenic, a key ingredient in pesticides that attacked infesting boll weevils. As the boll weevil population shrank, the demand for white arsenic fell, causing the abandoning of the mine in 1927. According to a 1939 article, published in the Vista Press, Hopkins also used this mine to find gold.

In 2016 San Diego State University conducted soil samples in the vicinity of the mine site. Some locations, including portions of the Miner's Ridge Loop trail revealed high levels of arsenic present. As of January 6, 2017 the San Diego City Attorney recommended closure of the lower sections of the trail pending further study.

The Jas Arnold Trail for All People (located at the Miner's Ridge Loop parking lot), a handicapped accessible trail named in honor of the park's long serving Chair of the Citizen's Advisory Committee who passed in May of 2016 remains open to the public. The Lilac Canyon Trail which connects this same parking lot to the Glider Port also remains open.

The park is a popular hiking spot, offering numerous trails of varying length and difficulty.

All content from Kiddle encyclopedia articles (including the article images and facts) can be freely used under Attribution-ShareAlike license, unless stated otherwise. Cite this article:
Black Mountain Open Space Park Facts for Kids. Kiddle Encyclopedia.