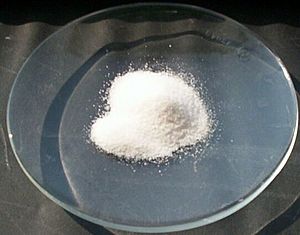 Arsenic trioxide, also known as white arsenic, arsenic(III) oxide, or arsenious oxide, is a chemical compound. Its chemical formula is As2O3. It has arsenic and oxide ions in it. The arsenic is in its +3 oxidation state.

It is used to make elemental arsenic. It was used as a pigment (in Paris green) and as a wood preservative but was banned in many countries because it is so toxic. Arsenic trioxide is used to fight cancer.

Arsenic trioxide is highly toxic when eaten. It also can be toxic if on the skin for long amounts of time. It affects the digestive system when eaten. Workers exposed to arsenic trioxide fumes in their job can be poisoned as well.

All content from Kiddle encyclopedia articles (including the article images and facts) can be freely used under Attribution-ShareAlike license, unless stated otherwise. Cite this article:
Arsenic trioxide Facts for Kids. Kiddle Encyclopedia.