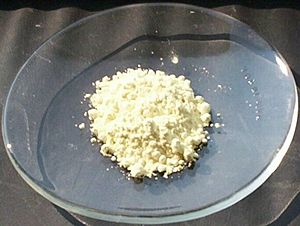 Bismuth(III) oxide, also known as bismite and bismuth trioxide, is a chemical compound. Its chemical formula is Bi2O3. It has bismuth and oxide ions in it. The bismuth is in its +3 oxidation state.

Bismuth(III) oxide is a pale yellow solid. It does not dissolve in water. It dissolves in acids to make other bismuth(III) salts. When it is electrolyzed, it makes a bright red solid, bismuth(V) oxide. It has several different crystal structures that have been studied. It reacts with rare earth metal oxides and the products are being studied. 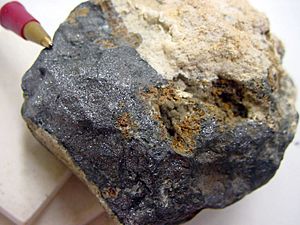 Bismite is the mineral form of bismuth(III) oxide. It is an ore of bismuth. Its Mohs hardness is 4.5 to 5 and its specific gravity is quite high, around 8 or 9. It is made when bismuthinite is oxidized. It was first found in Nevada in 1868.

Bismuth(III) oxide is used in pyrotechnics to make fireworks that burn with an effect called "dragon's eggs". Lead(II,IV) oxide was used for this in the past, but now is considered too toxic to use. It is also used in research and the making of other bismuth compounds.

All content from Kiddle encyclopedia articles (including the article images and facts) can be freely used under Attribution-ShareAlike license, unless stated otherwise. Cite this article:
Bismuth(III) oxide Facts for Kids. Kiddle Encyclopedia.