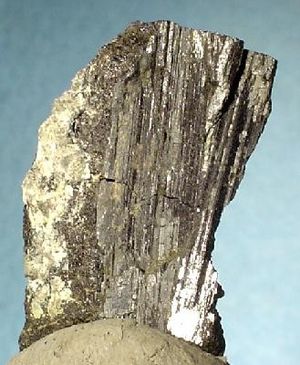 Bismuth(III) sulfide, also known as bismuth sulfide, is a chemical compound. Its chemical formula is Bi2S3. It has bismuth and sulfide ions in it. The bismuth is in its +3 oxidation state.

Bismuth(III) sulfide is a brown solid. It does not dissolve in water. It is made by reacting hydrogen sulfide with a bismuth compound like bismuth(III) chloride.

It is found as the mineral bismuthinite. Bismuthinite is lead-gray to tin-white, with an iridescent tarnish. It is an important ore of bismuth. It has a metallic color. It was first found in Bolivia. Its specific gravity is around 6.8.

All content from Kiddle encyclopedia articles (including the article images and facts) can be freely used under Attribution-ShareAlike license, unless stated otherwise. Cite this article:
Bismuth(III) sulfide Facts for Kids. Kiddle Encyclopedia.