Artemisia californica, also known as California sagebrush, is a species of western North American shrubs in the sunflower family.

The shrub is native to western California and northwestern Baja California. It is endemic to the California chaparral and woodlands ecoregion, in coastal sage scrub, coastal strand, chaparral, and dry foothill communities. It is found from sea level to 800 m (2600 ft.) in elevation.

The prototypical plant association of A. californica is chaparral, notably in the California Coast Ranges; toyon and sage are also key components of communities which are transitional between chaparral and coastal sage scrub. It is often claimed to be allelopathic, secreting chemicals into the ground which inhibit other plants from growing near and around the shrub. 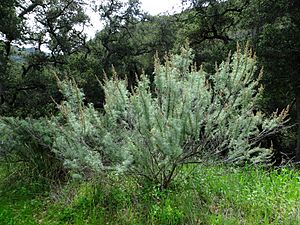 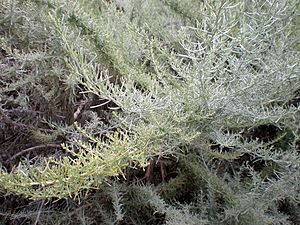 Artemisia californica branches from the base and grows out from there, becoming rounded; it grows 1.5 to 2.5 meters (5–8 ft.) tall. The stems of the plant are slender, flexible, and glabrous (hairless) or canescent (fuzzy). The leaves range from one to 10 centimeters long and are pinnately divided with 2–4 threadlike lobes less than five centimeters long. Their leaves are hairy and light green to gray in color; the margins of the leaves curl under.

The inflorescences are leafy, narrow, and sparse. The capitula are less than 5 millimeters in diameter. The pistillate flowers range in number from 6 to 10 and the disk flowers range from 15 to 30, and they are generally yellowish, but sometimes red.

The fruits produced are resinous achenes up to 1.5 millimeters long. There is a pappus present that forms a minute crown on the body of the achene.

The plant contains terpenes which make it quite aromatic. Many people regard the species to have a pleasant smell.

Although Artemisia californica is a sagebrush, not a true sage, it can be used in cooking as a spice and can also be made into a tea.

This shrub is cultivated as an ornamental plant in native plant and wildlife gardens, natural landscaping design, and for restoration of disturbed sites and degraded coastal sage scrub. There are several lower height cultivars in the horticulture trade, for drought tolerant groundcover use.

It thrives in full sun, preferring to grow on west or north-facing slopes. It needs little water and prefers no water in the summer months; it does not seem that soil types affect plant growth much. This plant relies on wildfire for seed germination and burned plants can crown-sprout and keep growing.

Animals rarely eat Artemisia californica, probably due to the presence of bitter aromatic terpenes, but it does provide good cover for smaller birds and other animals that can fit between its stems. It is an important habitat plant for the endangered California gnatcatcher.

All content from Kiddle encyclopedia articles (including the article images and facts) can be freely used under Attribution-ShareAlike license, unless stated otherwise. Cite this article:
California sagebrush Facts for Kids. Kiddle Encyclopedia.