Santiago Peak is the southern mountain of Orange County's Saddleback formation. It is the highest and most prominent peak of both the Santa Ana Mountains and Orange County, and also marks a border point with Riverside County. The top of it is covered with many microwave and telecommunication antennas. It is named for Santiago Creek, which begins on its southwestern flank. During winter, snow does fall on the peak. 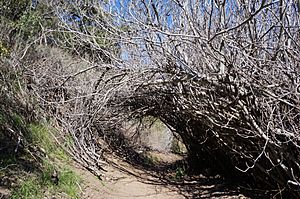 The Trail to Holy Jim Falls

More than one trail leads to the top of Santiago Peak, but the most popular among hikers is the Holy Jim trail. The Holy Jim trail gains about 4,000 feet (1,200 m) in elevation and is a 16-mile (26 km) round trip. It is a moderate to strenuous hike and is most enjoyable during spring and winter due to the large number of insects during warmer times of the year.

From the summit of Santiago Peak, one can see the larger Southern California peaks like San Gorgonio Mountain, San Jacinto Peak, and Mount San Antonio. However, due to the large number of antennas at the top of Santiago Peak, a full 360-degree view of the surrounding landscapes is not possible. Those at the top must walk approximately a quarter-mile around the perimeter of all the antennas to take in views of every direction.

All content from Kiddle encyclopedia articles (including the article images and facts) can be freely used under Attribution-ShareAlike license, unless stated otherwise. Cite this article:
Santiago Peak Facts for Kids. Kiddle Encyclopedia.