Kids Encyclopedia Facts
This page is about the settlement in San Diego County. For the botanical preserve, see Elfin Forest Natural Area. For the plant community, see Elfin forest.

This rural community is located about 9 miles by road from the Pacific Ocean and contains large homes on rolling hills and many trails for hiking and horseback riding. Most of the properties, which are split between the Rancho Santa Fe school district and SDHS school district, have amenities for horses and/or grow trees like avocado, orange, lemon, and grapefruit. Elfin Forest is home to a large number of domestic horses and farm animals.

The community maintains a strict minimum lot size requirement of 2 acres (8,100 m2) and does not allow sub-dividing.

Elfin Forest is said to be one of the most haunted places in the world.

Elfin forest is one of the terms used by naturalists to describe the vegetation which formerly covered much of Southern California. It is variously known as coastal scrub, bush-forest, elfin-wood, heath-scrub, and chaparral. It was designed by nature as the best possible means for conservation of the land and supports many endangered plants and animals, including the gnatcatcher. This coastal scrub is now endangered and the state government is studying ways to protect it. The Elfin Forest valley contains one of the largest areas of coastal scrub in Southern California.

In the 1940s a fire burned a portion of Questhaven Retreat. The retreat's founders, Flower and Lawrence Newhouse, invited the director of the Santa Barbara Botanical Gardens to visit Questhaven to help plan for its replanting. He described the characteristic growth of the area as "elfin forest", a name describing a number of dwarf trees and shrubs mingled together to form a particular variety of chaparral: toyon berry, white and blue wild lilac, manzanita, sumac, lemonade berry, elderberry, mountain mahogany, scrub oak and many more. This combination was found in only three locations in southern California, he said

The name delighted Flower. On the spot, she and Lawrence decided the hills and valley nestling Questhaven would be called Elfin Forest Canyon and they posted signs along the road using that name.

The naming of the area has also been attributed to the children of Dr. Harvey Urban, a prominent San Diego dentist who, along with Jack Donnelley and George Dew, purchased 20 acres for a vacation spot for their families and friends. While Dr. Urban's friends called the place "Tooth Acres", his five children named the spot Elfin Forest from the book Elfin Forest they had just finished reading.

Elfin Indians There is evidence that possible ancestors of the Northern Diegueno Indians lived in the Harmony Grove area. An archeological bonanza, many artifacts have been found and efforts to preserve others are underway. Mortars, metates, pictographs, and petroglyphs discovered there help shed light on the Uyman language they were known to have spoken and contribute to a clearer understanding of their primitive way of life more than 9,000 years ago. There are ancient petroglyphs in rocks at the extreme western end of Ninth Avenue. These are Indian symbols and have a connection with others found in Escondido, Hemet, Borrego, and Rancho Bernardo. They seem to be direction finders similar to the magnificent rocks at Stonehenge in England.

The environs of Harmony Grove area were used for meetings of many different Indian tribes. It was considered their Peace Grounds. The Indians believed that the entire area of Harmony Grove and Elfin Forest gave off beneficial vibrations.

Two tribes of Indians who inhabited our area were San Dieguenos and Luisenos. Indians ate edible grasses, wild garlic, mustard, dandelions, berries and other goodies that the unenlightened don't know about. The indigenous oak trees provided acorns that were an important source of nourishment. At least one person in the area has found metates on his property. Surely Indians and early settlers ate deer whose decedents are to be seen in the Questhaven area.

Land Grants The old Spanish and Mexican land grants of the mid-1800s never included any of the chaparral that could possibly be avoided since it was considered undesirable and made poor pasture land. Squatter Pierre Renand claimed 160 acres in the Harmony Grove area, which was adjacent to the Ranch Rincon del Diablo granted to Juan Bautista Alvardo in 1843. In 1868, the rancho was sold to Ed McGeary and three members of the Wolfskill family. John Wolfskill acquired Renand's portion in 1876 for "one dollar's gold coin." A huge sheep ranch prospered on the Wolfskill ranch for fifteen years.

Spook's Canyon In the 1880s, a Welshman named Spook homesteaded in the Elfin Forest valley. As recently as 1971, remains of his orchard could be seen. It is probably because of this man that we hear the term "Spooks Canyon," which has been a nickname our valley has had for years. The meetings of spiritualist groups in Harmony Grove provide another version of the origin of that nickname. The name also fits in well with the ghosts and legends that are also part of our area. The Old Stage Coach Route

Before the turn of the century, the Butterfield Stage Coach Company used Harmony Grove Road as part of its route from Escondido to San Diego. The route went from Ramona to Escondido, followed the Escondido Creek, turned west to Encinitas and then south to San Diego. A man name Parkrider had a store near the junction of Harmony Grove and Elfin Forest Roads. The road was paved in the late 1950s and after the vacation ranch closed down in the 1990s, even the few remaining bricks from the store disappeared.

The Campground The area's beauty - year round stream and shade trees, as mentioned earlier, led Dr. Harvey Urban, Jack Donnelley, and George Dew to buy twenty acres at the junction of what is now Harmony Grave and Elfin Forest Roads in 1959. They built a house and a dam to create a lake and began adding spaces for trailers, campers, and mobile homes. Additional land (for a total of 97 acres) was purchased and a grocery store was opened. It was referred to as the Elfin Forest Vacation Ranch. They provided boating, fishing, movies, and square dancing. When Dr. Urban opened those acres up to public camping, the campground and the valley around it became popularly known as Elfin Forest. The campground no longer exists. The property is scheduled for development soon.

Until 1977, the community was sparsely developed. In addition to Questhaven Retreat, Harmony Grove Spiritualist Association, and the Elfin Forest Vacation Ranch, there were a few older homes in the surrounding hills. Many new homes were built between 1977 and 1980. Inflation caused interest rates to rise and home building slowed until late 1984. From 1985 to 1992, there was a boom in building in the area. It is estimated that the population of the area grew to 450 homes, with 15 to 20 homes being added each year. From 1992 to 1995, the economic slowdown in San Diego caused building to almost cease. 1996 saw a pickup in the economy with some new building. The population according to the last census stood at 1,000 in 1996 with a projected population of 2,156 in the year 2015. (Ref: SANDAG)

In 1978, there were heavy rains in San Diego County. The Elfin Forest–Harmony Grove areas were severely impacted as torrents of water rushed down Escondido Creek causing a "40-year flood". The beautiful lake in the Vacation Ranch was swept away, the basin around it was severely flooded and the Ranch was devastated. Dr. Urban, who had plans to develop it into exclusive mobile home estates, died shortly afterwards, and his family was forced to sell the acreage. There were plans to develop the ranch into a "Lawrence Welk" type of mobile home park called Lake Elfin Forest, but the plans were not approved by the county.

A volunteer fire department, the Elfin Forest/Harmony Grove Fire Department, was formed in 1972 and became a fully funded volunteer department in 1982 (voter approval of 89 percent).

In 1975, before Elfin Forest was large enough to be heard, the county approved placing a landfill on Questhaven Road. In 1983, the county proposed placing a trash-to-energy plant on that landfill. The residents of Elfin Forest waged a very long battle to stop construction of that plant. After years of hearings, litigation and many setbacks both politically and financially, the project was stopped. The front end of the plant, however was built in 1993 as a recycling plant, but it was closed down in less than 18 months as being financially unworkable. The landfill was permanently closed in the spring of 1997. The county ended up selling the entire solid waste system to the private sector and the recycling plant is for sale.

As San Diego County continues to develop, the remaining "open space" in Elfin Forest and Harmony Grove is increasingly threatened and scarce.

Elfin Forest Recreational Reserve is a family hike through an ecological preserve. The main trail climbs 1200 ft and has many tributary trails. The Escondido Creek marks the trailhead. The main trail is a 1.6 mile which meanders up a wall then leads up to numerous trails of varying difficulties. There is a Botanical Trail well marked describing the various plant life in the area. One can also extend the hike about 9 miles one way over the mountain to Lake Hodges. 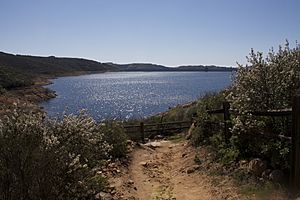 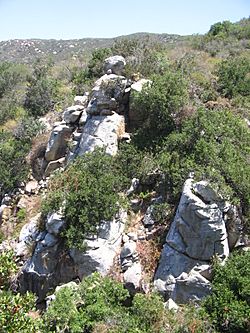 Elfin Forest is one of the terms used by naturalists to describe the chaparral vegetation which formerly covered much of coastal Southern California. It is variously known as California coastal sage and chaparral ecoregion, bush-forest, elfin-wood, heath-scrub. The coastal scrub was designed as the best possible means for conservation of the land and habitats that support many endangered plants and animals, including the gnatcatcher. This coastal scrub is now endangered and the state government is studying ways to protect it. The Elfin Forest valley contains one of the largest areas of virgin coastal scrub in Southern California. An Elfin forest is also a type of Dwarf forest in coastal California and elsewhere.

All content from Kiddle encyclopedia articles (including the article images and facts) can be freely used under Attribution-ShareAlike license, unless stated otherwise. Cite this article:
Elfin Forest, California Facts for Kids. Kiddle Encyclopedia.