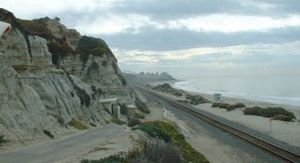 View to the south

San Onofre State Beach is a 3,000-acre (1,214 ha) state park located in San Diego County, California, USA. The beach is 3 miles (5 km) south of the city of San Clemente on Interstate 5 at Basilone Road. The state park is leased to the state of California by the United States Marine Corps. Governor Ronald Reagan established San Onofre State Beach in 1971. With over 2.5 million visitors per year, it is one of the five most-visited state parks in California, hosting swimmers, campers, kayakers, birders, fishermen, off-duty Marines, bicyclists, sunbathers, surfers, and the sacred Native American site of Panhe. It is named after the fourth-century saint Onuphrius.

Located between San Onofre Bluffs and San Onofre Surf Beach is the San Onofre Nuclear Generating Station (SONGS), which was officially shut down in June 2013. 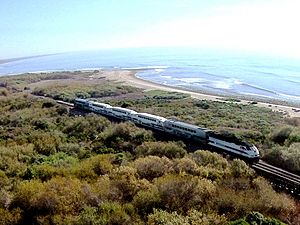 The rail line for which Trestles is named

The San Onofre Bluffs portion of San Onofre State Beach features 3.5 miles (5.6 km) of sandy beaches with six access trails cut into the bluff above. The campground is along the old U.S. Route 101 adjacent to the sandstone bluffs. The beach is popular with swimmers and surfers. San Onofre includes San Onofre Bluffs and Beach areas; San Onofre Surf Beach, a day use facility; San Mateo campgrounds and day use facility; and Trestles, accessible via a nature trail from San Mateo Campgrounds. Alcohol is banned from all beaches within the State Park.

The park includes a marshy area where San Mateo Creek meets the shoreline and Trestles, a well-known California surfing site. Whales, dolphins and sea lions can be seen offshore from time to time. The park’s coastal terrace is chaparral-covered. 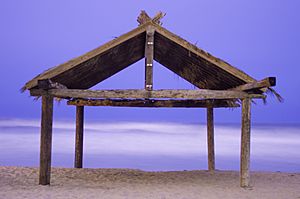 A surfing and fishing camp had been there since the 1920s, before the land was taken by the U.S. government to establish Camp Pendleton, a U.S. Marine training camp during World War II. Surfers using redwood boards have visited San Onofre since at least the 1940s, including notables Lorrin "Whitey" Harrison, Don Okey, Al Dowden, Tom Wilson, and Bob Simmons.

San Onofre has several surf breaks on its 3.5 miles (5.6 km) of coast, ranging from the beginner’s gentle breaking waves to one of the premiere surf breaks in the United States, Trestles.

Panhe at San Onofre is an ancient Acjachemen village that is over 8,000 years old and a current sacred, ceremonial, cultural, and burial site for the Acjachemen people. Many Acjachemen people trace their lineage back to Panhe. It is the site of the first baptism in California, and in 1769 saw the first close contact between Spanish explorers, Catholic missionaries, and the Acjachemen people. The United Coalition to Protect Panhe and The City Project advocate for the preservation of the site. In keeping with the Padres’ tradition of naming areas after patron saints, this area was named after the obscure Egyptian, St. Onuphrius.

All content from Kiddle encyclopedia articles (including the article images and facts) can be freely used under Attribution-ShareAlike license, unless stated otherwise. Cite this article:
San Onofre State Beach Facts for Kids. Kiddle Encyclopedia.