Del Mar is a beach city in San Diego County, California. The population was estimated at 4,311 in 2014, up from 4,161 at the 2010 census. The Del Mar Horse Races are hosted on the Del Mar racetrack every summer. Del Mar is Spanish for "of the sea" or "by the sea", because it is located on the Pacific Ocean.

In 1885, Colonel Jacob Taylor purchased 338 acres (1.37 km2) from Enoch Talbert, with visions of building a seaside resort for the rich and famous. The United States Navy operated a Naval Auxiliary Air Facility for blimps at Del Mar during World War II.

In 1966, winners of a KHJ radio station contest rode with members of The Monkees band on a train from Del Mar, which had been renamed 'Clarksville' for the day by the town's mayor.'

Del Mar's climate is considered mediterranean-subtropical with warm, dry summers and mild, humid winters, and is considered one of the most desirable climates in the United States. Temperatures exceed 85 °F (29 °C) only on a few occasions throughout the year and rarely drop below 41 °F (5 °C). The average yearly temperature in Del Mar is approximately 65 °F (18 °C).

Del Mar is also one of few locations in which the Torrey Pine tree grows. The Torrey Pine is the rarest pine in the United States and only two populations of this endangered species exist. The Soledad Valley at the south of Del Mar severs two colony segments of the Pinus torreyana. 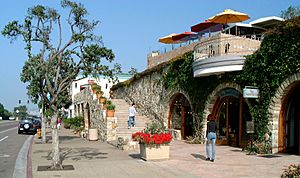 The Plaza Shopping Center in Del Mar at 15th Street

There were 2,178 households out of which 15.4% had children under the age of 18 living with them, 42.8% were married couples living together, 4.8% had a female householder with no husband present, and 50.3% were non-families. 36.6% of all households were made up of individuals and 7.4% had someone living alone who was 65 years of age or older. The average household size was 2.01 and the average family size was 2.61.

The historic Del Mar station was the only passenger stop between Oceanside and San Diego for many years and welcomed passengers from Los Angeles to the racetrack. When the Coaster commuter rail was being planned, officials recognized the need for ample parking, accessible access for wheelchair users, and a sensible routing for bus and shuttle service, and nearby Solana Beach was selected for a new station. The Del Mar City Council rejected any significant expansion of the facility, while still hoping to keep it in operation as an Amtrak-only station; but Amtrak moved their services to the new station also.

All content from Kiddle encyclopedia articles (including the article images and facts) can be freely used under Attribution-ShareAlike license, unless stated otherwise. Cite this article:
Del Mar, California Facts for Kids. Kiddle Encyclopedia.