James Francis "Jimmy" Durante (February 10, 1893 – January 29, 1980) was an American singer, pianist, comedian, writer, and actor. His famous nickname was The Great Schnozzola (a reference to his big nose). He was also known for his deep raspy voice when he said "Ha-Cha-Cha-Chaaaaa!". He won an Emmy Award in 1952.

Durante was born on February 10, 1893 in Brooklyn, New York. His family were Italian Catholics. He studied at the Saint Malachy's Roman Catholic Church (also known as The Actors' Chapel). 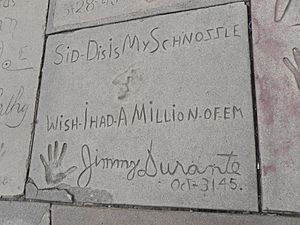 Jimmy Durante's noseprint, handprint, and signature in front of the Grauman's Chinese Theatre

On September 10, 1933, Durante appeared on Eddie Cantor's radio show, The Chase and Sanborn Hour. He worked on the show until November 12 of that year. When Cantor later left, Durante took over the show as its star from April 22 to September 30, 1934. He then moved on to The Jumbo Fire Chief Program (1935–36).

On August 4, 1955, The Jimmy Durante Show on NBC was the venue of the final role by the famous Brazilian singer Carmen Miranda. Miranda fell to her knees while dancing with Durante, who quickly told the band, "STOP--the music!" He helped Miranda up to her feet as she laughed, "I'm all out of breath!". He repled, "That's OK, honey, I'll take your lines." Miranda laughed again and quickly pulled herself together and finished the show. However, the next morning, August 5, Miranda died at home from another heart attack.

Durante was married to Jeanne Olsen from 1921 until her death in 1943 from heart disease. He was later married to Margie Little from 1960 until his own death in 1980. Little and Durante adopted one daughter, Cecilia Alicia. 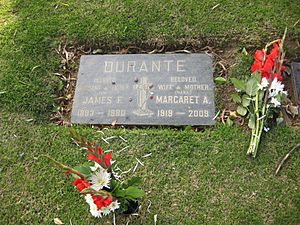 Durante was a member of the Democratic Party. He retired in 1972 after having many strokes which left him in a wheelchair.

Durante died on January 29, 1980 in his home in Santa Monica, California. He died from pneumonia, and was 86 years old. He is buried at the Holy Cross Cemetery, Culver City, California.

All content from Kiddle encyclopedia articles (including the article images and facts) can be freely used under Attribution-ShareAlike license, unless stated otherwise. Cite this article:
Jimmy Durante Facts for Kids. Kiddle Encyclopedia.