Charles David Keeling (April 20, 1928 – June 20, 2005) was an American scientist whose recording of carbon dioxide at the Mauna Loa Observatory confirmed Svante Arrhenius's proposition (1896) of the possibility of anthropogenic contribution to the "greenhouse effect" and global warming, by documenting the steadily rising carbon dioxide levels. The Keeling Curve measures the progressive buildup of carbon dioxide, a greenhouse gas, in the atmosphere.

Keeling was born in Scranton, Pennsylvania, to Ralph Keeling and Grace L Keeling (née Sherberne). His father, an investment banker, excited interests of astronomy in a 5-year-old Charles, while his mother instilled a lifelong love of music. He graduated with a degree in chemistry from the University of Illinois in 1948. Charles Keeling earned a PhD in chemistry from Northwestern University in 1953 under Malcolm Dole, a polymer chemist. Most of Dole's graduates were going straight into the oil industry; Keeling "had trouble seeing the future this way" and had become interested in geology, for which he had acquired most of the undergraduate coursework during his PhD. Keeling had applied for postdoctoral positions as a chemist almost exclusively to geology departments "west of the continental divide." He received an offer from Harrison Brown who had recently started a geochemistry department at California Institute of Technology. He was a postdoctoral fellow in geochemistry there until he joined Scripps Institution of Oceanography in 1956, and was appointed professor of oceanography there in 1968.

At Caltech he developed the first instrument able to measure carbon dioxide in atmospheric samples with consistently reliable accuracy. Keeling camped at Big Sur where he used his new device to measure the level of carbon dioxide and found that it had risen since the 19th century.

Work with Scripps Institution of Oceanography, 1958–2005 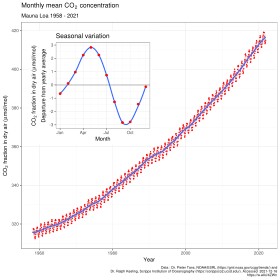 Keeling worked at the Scripps Institution for 43 years during which time he published many influential papers. Roger Revelle, the Director of Scripps Institution of Oceanography, based at La Jolla, California, persuaded Keeling to continue his work there. Revelle was also one of the founders of the International Geophysical Year (IGY) in 1957–58 and Keeling received IGY funding to establish a base on Mauna Loa in Hawaii, two miles (3,000 m) above sea level.

In the early 1960s, the National Science Foundation stopped supporting his research, calling the outcome "routine". Despite this lack of interest, the Foundation used Keeling's research in its warning in 1963 of rapidly increasing amounts of heat-trapping gases. A 1965 report from President Johnson's Science Advisory Committee similarly warned of the dangers of extra heat-trapping gases, which cause the temperature of the Earth to rise.

The data collection started by Keeling and continued at Mauna Loa is the longest continuous record of atmospheric carbon dioxide in the world and is considered a reliable indicator of the global trend in the mid-level troposphere. Keeling's research showed that the atmospheric concentration of carbon dioxide grew from 315 parts per million (ppm) in 1958 to 380 (ppm) in 2005, with increases correlated to fossil fuel emissions. There has also been an increase in seasonal variation in samples from the late 20th century and early 21st century.

Keeling was an enthusiastic outdoorsman who made many hiking and camping trips to the Western mountains, particularly the Cascade Mountains of Washington state. He was an active member of the Wilderness Society for much of his life.

Keeling married Louise Barthold in 1954. They had five children, one of whom (Ralph Keeling) followed in his father's footsteps and was a climate scientist at Scripps Institution of Oceanography. Charles Keeling was also an accomplished classical pianist who almost chose a career in music. Keeling was a founding director of the University of California San Diego Madrigal Singers. He was also general chairman of the citizens committee which drafted the Del Mar General Plan (or "Community Plan") in 1975.

He was a member of the commission on global pollution of the International Association of Meteorology, and scientific director of the Central CO2 Calibration Laboratory of the World Meteorological Organization.

All content from Kiddle encyclopedia articles (including the article images and facts) can be freely used under Attribution-ShareAlike license, unless stated otherwise. Cite this article:
Charles David Keeling Facts for Kids. Kiddle Encyclopedia.