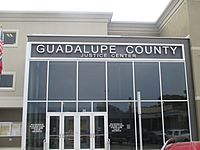 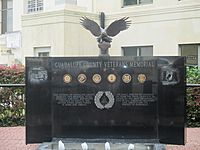 Guadalupe County () is a county located in the U.S. state of Texas. As of the 2010 census, its population was 131,533. The county seat is Seguin. The county was founded in 1846 and is named after Guadalupe River.

Indigenous paleo-Indian hunter-gatherers were the first inhabitants of the area, thousands of years before European colonization. Later historic Indian tribes settled in the area, including Tonkawa, Karankawa, Kickapoo, Lipan Apache, and Comanche.

In 1689, Alonso de Leon named the Guadalupe River for Spain in honor of Our Lady of Guadalupe.

In 1806, French army officer José de la Baume, who later joined the Spanish army, was rewarded for his services to Spain with title to 27,000 acres (110 km2) of Texas land, the original El Capote Ranch. The grant was reaffirmed by the Republic of Mexico after it achieved independence.

Following Mexico's independence from Spain, Anglo-Americans from the United States settled in Texas in 1821 and claimed Mexican citizenship. In 1825, Guadalupe County was part of Green DeWitt's petition for a land grant to establish a colony in Texas, which was approved by the Mexican government. From 1827 to 1835, twenty-two families settled the area as part of DeWitt's colony.

Following Texas' gaining independence from Mexico (1836), 33 Gonzales Rangers and Republic veterans established Seguin. Founded as Walnut Springs in 1838, the settlement's name was changed to Seguin the next year to honor Juan Nepomuceno Seguín, who had fought for independence.

In 1840, the Virginian Michael Erskine acquired the El Capote Ranch for use as a cattle ranch. In 1842, the Republic of Texas organized Guadalupe County as a judicial county. The Texas Supreme Court declared judicial counties to be unconstitutional. In 1845, Prince Carl of Solms-Braunfels secured title to 1,265 acres (5.12 km2) of the Veramendi grant in the northern part of the former judicial county.

Following the annexation of Texas by the United States (1845), the Prussian immigrant August Wilhelm Schumann arrived on the Texas coast aboard the SS Franziska in 1846 and purchased 188 acres (0.76 km2) in Guadalupe County. Shortly thereafter, the state legislature established the present county from parts of Bexar and Gonzales counties.

In 1846, during the war between the United States and Mexico, a wagon train of German immigrant settlers bought Guadalupe land from August Schumann. The following year the town of Schumannsville was established by German immigrants and named after him. Numerous German immigrants entered Texas at Galveston following the revolutions of 1848 in German states, settling in Guadalupe County and central Texas. After their own struggles, they tended to oppose slavery.

The last Indian raid into the area was made by the Kickapoo in 1855.

By 1860, there were 1,748 slaves of African descent in the county, generally brought in from the South by slaveholder migrants. In 1861, the people of the county voted 314–22 in favor of secession from the Union. Guadalupe County sent several troops to fight for the Confederate States Army. Following the end of the Civil War and the emancipation of the slaves (1865), a Freedmen's Bureau office opened in 1866 in Seguin to supervise work contracts between former slaves and area farmers. Together, German Americans and African Americans joined the Republican Party, leading Guadalupe County to be a reliably Republican one into the 20th century, even after the state disfranchisement of African Americans in 1901 by imposition of a poll tax.

In 1929, oil was discovered at the Darst Creek oilfield. By 1930, tenant farming and sharecropping comprised 64 percent of the county's farms.

Over the next five decades, the economy changed markedly as the area became more urbanized and less dependent on agriculture. By 1982, professional and related services, manufacturing, and wholesale and retail trade involved nearly 60 percent of the work force in the area.

Texas Lutheran University has about 1,400 students. It is affiliated with the Evangelical Lutheran Church in America. It was ranked number three among the best west regional universities by U.S. News & World Report in 2013. Texas Lutheran is now a member of the Southern Collegiate Athletic Conference, NCAA Division III, with Austin College, Colorado College, Centenary College of Louisiana, Schreiner University, Southwestern University, Trinity University, and the University of Dallas.

All content from Kiddle encyclopedia articles (including the article images and facts) can be freely used under Attribution-ShareAlike license, unless stated otherwise. Cite this article:
Guadalupe County, Texas Facts for Kids. Kiddle Encyclopedia.