Luling is a city in Caldwell and Guadalupe counties, Texas, United States, along the San Marcos River. The population, as of the 2010 census, was 5,411, and the population was estimated at 5,764 in 2015. The town was named after a New York banker, Charles Luling. He was a personal friend of Thomas Wentworth Pierce, and provided the financing for the railroad as well the purchase of the land that became Luling. The Caldwell County portion of Luling is part of the Austin metropolitan area.

Luling was founded in 1874 as a railroad town and became a rowdy center for the cattle drivers on the Chisholm Trail. Contempt of the law by the cowboys helped Luling become known as the "toughest town in Texas". After the great cattle drives ended in the late 1880s, Luling quieted down to a town of about 500 and cotton ruled the local economy. Perhaps due to arrival of immigrants, including some Jews, in the late-19th century, Luling began a long, slow, period of growth, and by 1925 the population reached 1,500.

Davis' discovery opened up an oilfield 12 miles (19 km) long and 2 miles (3 km) wide. The economy quickly moved from the railroad and agriculture to oil. The population of the town rapidly increased to over 5,000. By 1924, the Luling Oil Field was producing over 15 million barrels (2,400,000 m3) of oil per year, and oil formed much of Luling's economy for the next 60 years.

As oil grew in importance in the 1930s and 1940s, the railroads that helped form the town declined and largely pulled out of Luling.

Luling is located in southern Caldwell County, 47 miles (76 km) south of Austin. The city limits extend south along Texas State Highway 80 across the San Marcos River into Guadalupe County, reaching as far as Interstate 10 Exit 628. Via I-10, San Antonio is 57 miles (92 km) to the west and Houston is 141 miles (227 km) to the east.

The climate in this area is characterized by hot, humid summers and generally mild to cool winters. According to the Köppen Climate Classification system, Luling has a humid subtropical climate, abbreviated "Cfa" on climate maps. 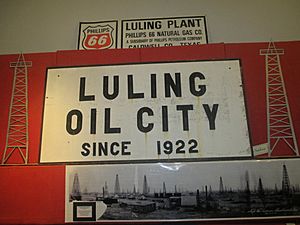 The Luling Oil Museum, based on the 1922 petroleum discovery, is housed in the Chamber of Commerce office. 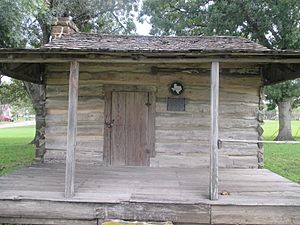 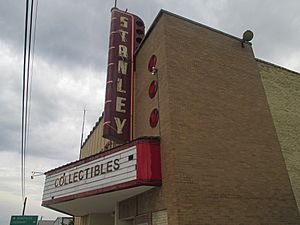 Though it once aired regular films, the Stanley Theatre in Luling now houses collectibles. 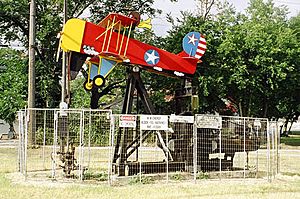 One of Luling's many decorative pumpjacks

The Luling Watermelon Thump is held each year during the last full weekend in June. It is a big celebration for the locals and draws many people from out of town as well. A favorite activity associated with the 'Thump' is the watermelon seed spitting contest.

Luling is also home to Night In Old Luling, held in October. It features games, food, booths, and a scarecrow contest.

Some of the oil jacks along the main streets of Luling are decorated with whimsical characters, such as a girl eating a watermelon.

The Luling Dry Tri. is an annual event held in September. It is an athletic contest comprising three consecutive events: biking 12 miles, running 3.23 miles and paddling 6 miles. A no swim triathlon (Dry Tri) where anyone may participate either solo, as a two-person tag-team or three-person relay team. The event benefits several local groups, including the Luling Police and Fire Departments, and the Luling High School Cross Country Team.

All content from Kiddle encyclopedia articles (including the article images and facts) can be freely used under Attribution-ShareAlike license, unless stated otherwise. Cite this article:
Luling, Texas Facts for Kids. Kiddle Encyclopedia.