Kids Encyclopedia Facts
"Hays County" redirects here. It is not to be confused with Hayes County, Nebraska. 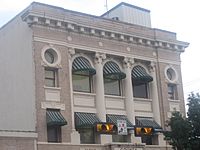 Hays County Annex Building across from the courthouse in San Marcos 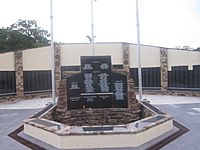 Hays County is located on the Edwards Plateau in the U.S. state of Texas. Hays County is part of the Austin-Round Rock metropolitan area. As of the 2020 census, its official population had reached 241,067. The county seat is San Marcos. Hays, along with Comal and Kendall Counties, was listed in 2017 as one of the nation's fastest-growing large counties with a population of at least 10,000. From 2015 to 2016, Hays County, third on the national list, had nearly 10,000 new residents during the year. Comal County, sixth on the list, grew by 5,675 newcomers, or 4.4%. Kendall County, the second-fastest growing county in the nation, grew by 5.16%. As a result of this growth, the counties have experienced new home construction, traffic congestion, and greater demand for public services. Bexar County, which includes San Antonio, grew by 1.75% during the year, but its sheer number of new residents exceeded 33,000.

The county is named for John Coffee Hays, a Texas Ranger and Mexican–American War officer.

Austin Community College is the designated community college for the whole county. It operates three distance-learning centers that offer basic and early college start classes, along with testing centers for online classes.

All content from Kiddle encyclopedia articles (including the article images and facts) can be freely used under Attribution-ShareAlike license, unless stated otherwise. Cite this article:
Hays County, Texas Facts for Kids. Kiddle Encyclopedia.