Wimberley is a city in Hays County, Texas, United States. The population was 2,626 at the 2010 census. 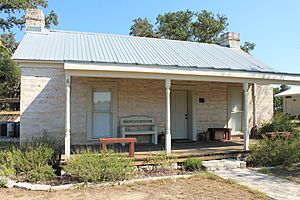 Wimberley started as a trading post settlement near Cypress Creek in 1848, the year Hays County was organized. After William Carvin Winters built a gristmill at the site in 1856, it took on the name Winters' Mill. When the mill was sold in 1864 to the Cude family, its name was changed to Cude's Mill. It was sold again in 1874 to Pleasant Wimberley and took on his name. Over the years, the mill was expanded to process lumber, shingles, flour, molasses, and cotton.

The mill is gone, but Winter's c. 1856 home survives and is listed on the U.S. National Register of Historic Places.

In 1880, Alfred vom Stein, a postmaster from San Marcos, applied to have a post office established in the community, calling it Wimberleyville. The application was granted, but the name shortened to Wimberley. Although the mill was shut down in 1925, the community was established and continued to grow, eventually becoming known as a resort town and becoming popular with tourists. Prior to its incorporation in May 2000, it was a census-designated place (CDP).

On May 25, 2015, the town was hit by catastrophic flooding during the 2015 Texas–Oklahoma floods, along the Blanco River which flows through town. The river crested at an estimated 41.5 feet, which was almost 30 feet above flood stage.

Cypress Creek joins the Blanco River in Wimberley. The Blanco then continues until it joins the San Marcos River. Blue Hole and Jacob's Well are located along Cypress Creek.

The climate in this area is characterized by hot, humid summers and generally mild to cool winters. According to the Köppen climate classification system, Wimberley has a humid subtropical climate, Cfa on climate maps.

All content from Kiddle encyclopedia articles (including the article images and facts) can be freely used under Attribution-ShareAlike license, unless stated otherwise. Cite this article:
Wimberley, Texas Facts for Kids. Kiddle Encyclopedia.