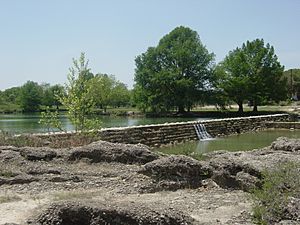 The Blanco River near Blanco, Texas.

The Blanco River is a river in the Hill Country of Texas in the United States.

The primary source for the river is a series of springs in northern Kendall County. The river flows generally eastward for 87 miles (140 km) through Kendall County, Blanco County and Hays County. Near San Marcos, it takes a southerly turn and joins with the San Marcos River.

The river is generally quite shallow, and it briefly dips below ground in some areas in the Hill Country. As with many of the rivers in the Texas Hill Country, there is great variability in the Blanco River's flow. The mean flow is 93 ft³/s (3 m³/s), but heavy rains in the river's watershed can cause flash flooding with little warning.

Early in the morning on May 24, during the 2015 Texas–Oklahoma floods, the Blanco River experienced catastrophic flooding. The river at Wimberley rose more than 30 feet in less than three hours, and set a new record high crest of more than 40 feet while disabling the gauge.

Rainfall totals of 10 to 13 inches were reported upstream in southern Blanco County, and all of this water entered the Blanco River and Little Blanco River. The Fischer Store Rd. bridge over the Blanco River was destroyed by flood waters west of Wimberley. The Blanco River, down stream from the bridge, at Wimberley reached a record crest. The gauge failed at 40 feet and the USGS later estimated the crest at 44.9 feet with peak flow of 175,000 cubic feet per second (5,000 m3/s). This height was more than 10 feet over the previous record height of 33.3 feet from 1929. Homes along the banks of the Blanco River from the City of Blanco, through Wimberley, and down to San Marcos experienced an historic flood. Many homes were totally destroyed and swept down stream. Many homes were struck by large debris, including full size cypress trees which typically lined the banks of the river. A house in the 100 block of Deer Crossing Ln. in Wimberley was washed away in the flood with nine people inside. There was one lone survivor while eight others died. Ten fatalities were reported for this event. The river experienced rises that exceeded 20 feet in one hour. Estimates of insured losses are around $100 million. Overall in Hays County, including Wimberley and San Marcos, 321 homes were destroyed, with hundreds more heavily damaged.

The upper reaches of the Blanco River are hilly, and the river's slopes are frequently steep. As the river reaches the Balcones Escarpment near San Marcos, it widens and its slopes moderate; this is typical of rivers in the central part of the state.

The Blanco River provides drinking water for the city of Blanco, as well as water supplies for nearby ranches. The river also supports a number of recreational areas, including the Blanco State Recreation Area in Blanco, the Boy Scouts camp El Rancho Cima near Wimberley, and other private parks and resorts.

All content from Kiddle encyclopedia articles (including the article images and facts) can be freely used under Attribution-ShareAlike license, unless stated otherwise. Cite this article:
Blanco River (Texas) Facts for Kids. Kiddle Encyclopedia.