Buda ( BYOO-də) is a city in Hays County, Texas, United States. The population was 7,295 in 2010, up from 2,404 at the 2000 census. In 2018 the estimated population was 16,449. Buda is part of the Austin-Round Rock-San Marcos metropolitan statistical area and is one of Austin's fastest growing suburbs. Residents of Buda are referred to as Budans. 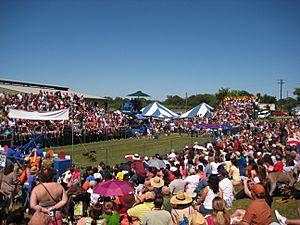 Because of its proximity to Austin, Texas, Buda is a suburb and commuter town for commuters to Austin. Commercial development along the I-35 corridor, such as the Cabela's sporting good store, has increased city sales tax revenue, and city leaders hope that further revitalization of downtown Buda will attract tourists and residents to the Main Street area.

Buda attracts national attention for its light-hearted wiener dog races, which is organized every April by the Buda Lions Club. Rooster Teeth Productions, the creators of the machinima series Red vs. Blue and The Strangerhood, had its office in Buda until moving back to Austin.

In 2009, the Buda City Council approved the city to become a member of the Film Friendly Texas Program, an organization which trains community leaders about the film production process and how to effectively facilitate filming requests.

The town of Buda sprang up along the route of the International-Great Northern Railroad, which was extended from Austin to San Antonio in 1880. Buda bore the name of “Du Pre” from its birth in 1881 until the autumn of 1887, when postal officials became aware that another Texas town was also named Du Pre. Cornelia Trimble platted the town of Du Pre on April 1, 1881, establishing streets and a 150-foot (46 m) wide “Reservation” between the lots and the railroad right of way, which allowed the railroad to place buildings on the parkland, including the depot that would become the lifeblood of the town over the next few decades. Several businesses sprang up, including the Carrington Hotel, which served meals to railroad travelers. By the time Du Pre found a new name for itself, the Carrington hotel was being referenced as “the Buda House.” In the “Dupre Notes” column of the Sept. 25, 1886 edition of the Hays County Times and Farmer’s Journal, the author notes that “The Buda House is one of the best hotels in the state. The polite and entertaining hostess, Mrs. Carrington, meets all with a courteous welcome.” According to the town’s oral tradition, the name of Buda is a corruption of the Spanish word “viuda,” or “widow,” referencing the widows who supposedly worked as cooks at the Carrington Hotel. Others suggest that like the town of Buda, Illinois, the town name is a nod to the exiles of the failed Hungarian Revolution of 1848 who settled in the area.

Buda was incorporated in 1948. By the mid-1980s Buda had attracted a cement plant and some craft industry.

There were 866 households, out of which 44.7% had children under the age of 18 living with them, 65.5% were married couples living together, 10.9% had a female householder with no husband present, and 20.8% were non-families. 17.1% of all households were made up of individuals, and 7.5% had someone living alone who was 65 years of age or older. The average household size was 2.78 and the average family size was 3.13.

Buda is home to numerous fast-growing small- to medium-sized businesses.

All content from Kiddle encyclopedia articles (including the article images and facts) can be freely used under Attribution-ShareAlike license, unless stated otherwise. Cite this article:
Buda, Texas Facts for Kids. Kiddle Encyclopedia.