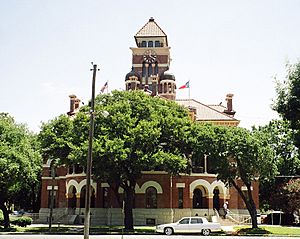 The Gonzales County Courthouse. The Second Empire style building was added to National Register of Historic Places in 1972.

Gonzales County is a county in the U.S. state of Texas, adjacent to Greater Austin-San Antonio. As of the 2010 census, its population was 19,807. The county is named for its county seat, the city of Gonzales. The county was created in 1836 and organized the following year. As of August 2020, under strict budgetary limitations, the County of Gonzales government-body is unique in that it claims to have no commercial paper, regarding it as "the absence of any county debt."

Green DeWitt's petition for a land grant to establish a colony in Texas is approved by the Mexican government.

Gonzales is established and named for Rafael Gonzales, governor of Coahuila y Tejas. It was settled by the first Anglo-American community west of the Colorado River.

1st – Slavery is abolished in the republic.

2nd – Consequently, those who have been until now considered slaves are free.

3rd – When the circumstances of the treasury may permit, the owners of the slaves will be indemnified in the mode that the laws may provide. And in order that every part of this decree may be fully complied with, let it be printed, published, and circulated.

Given at the Federal Palace of Mexico, the 15th of September, 1829.

The colony sends delegates to conventions (1832–1835) to discuss disagreements with Mexico.

September – The Mexican government views the conventions as treason. Troops are sent to Gonzales to retrieve the cannon.

October 2 – The Battle of Gonzales becomes the first shots fired in the Texas Revolution. The colonists put up armed resistance, with the cannon pointed at the Mexican troops, and above it a banner proclaiming, "Come and take it". Commemoration of the event becomes the annual "Come and Take It Festival".

February 23 – Alamo messenger Launcelot Smithers carries to the people of Gonzales, the Colonel William Barret Travis letter stating the enemy is in sight and requesting men and provisions.

February 24 – Captain Albert Martin delivers to Smithers in Gonzales the infamous "Victory or Death" Travis letter addressed "To the People of Texas and All Americans in the World" stating the direness of the situation. Smithers then takes the letter to San Felipe, site of the provisional Texas government.

February 27 – The Gonzales Alamo Relief Force of 32 men, led by Lieutenant George C. Kimble, depart to join the 130 fighters already at the Alamo.

March 1 – The Gonzales "Immortal 32" make their way inside the Alamo.

March 2 – Texas Declaration of Independence from Mexico establishes the Republic of Texas.

March 13–14 – Susanna Dickinson, the widow of the Alamo defender Almaron Dickinson, arrives in Gonzales with her daughter Angelina and Colonel Travis' slave Joe. Upon hearing the news of the Alamo, Sam Houston orders the town of Gonzales torched to the ground, and establishes his headquarters under a county oak tree.

May 14 – Santa Anna signs the Treaties of Velasco.

County votes 802–80 in favor of secession from the Union.

February 1 – Texas secedes from the Union

December – The Confederacy commissions Fort Waul, and constructs it with slave labor.

June 19 – Major General Gordon Granger arrives in Galveston to enforce the emancipation of all slaves. It is the first time African Americans in Texas know of the Emancipation. The date becomes celebrated annually in Texas as Juneteenth, and later as an official state holiday known as Emancipation Day.

All content from Kiddle encyclopedia articles (including the article images and facts) can be freely used under Attribution-ShareAlike license, unless stated otherwise. Cite this article:
Gonzales County, Texas Facts for Kids. Kiddle Encyclopedia.