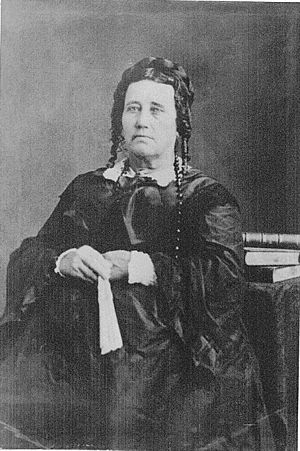 Susanna Wilkerson Dickinson (1814 – October 7, 1883) and her infant daughter, Angelina, were among the few American survivors of 1836 Battle of the Alamo during the Texas Revolution. Her husband, Almaron Dickinson, and 185 other Texian defenders were killed by the Mexican Army.

Susanna was born in 1814 in Williamson County, Tennessee and never learned to read and write. On May 24, 1829, when she was 15, she married Almaron Dickinson. Two years later, they became DeWitt Colonists, obtaining property on the San Marcos River, where they opened a blacksmith shop and also invested in a hat factory run by fellow colonist George Kimbell in Gonzales.

As the Mexican government increasingly abandoned its federalist structure in favor of a more centralized government, Almaron Dickinson became one of the early proponents of war. He would later join with other volunteers during the Battle of Gonzales, becoming one of the "Old Gonzales 18" in the battle which launched the Texas Revolution on October 2, 1835. By the end of the year, the Texian army had driven all Mexican soldiers from the territory. Soon after, Susanna joined Almaron at the former Alamo Mission in San Antonio de Bexar (now San Antonio, Texas) shortly after his assignment to the garrison there. The Dickinson family lived outside the Alamo, boarding with the Ruiz family.

In early 1836, Mexican President Antonio Lopez de Santa Anna led troops into Texas, which arrived in San Antonio on February 23 and immediately besieged the Alamo. It did not even have food stocked inside the mission to withstand the siege. The men thus quickly herded cattle into it and scrounged for food in the recently abandoned houses outside. Susanna and Angelina were among the families of garrison members who were brought inside for safety.

For the next twelve days, the Alamo lay under siege. Santa Anna planned an early morning assault for March 6. At 8:10 pm on March 5 the Mexican artillery ceased their bombardment. As Santa Anna had planned, the exhausted Texans soon fell into the first uninterrupted sleep many had had since the siege began. At 5:30 am Santa Anna gave the order to advance. As the Mexican soldiers began to yell and their buglers sounded, the Texan defenders awakened and rushed to their posts. Susanna, Angelina, and most other noncombatants gathered in the chapel sacristy for safety. She later mentioned that Davy Crockett stopped briefly to pray before taking his assigned position.

The Mexican soldiers soon breached the Alamo's outer walls. As previously planned, most of the Texians fell back to the barracks and the chapel. Almaron Dickinson briefly slipped from his post manning a cannon in the chapel to join Susanna in the sacristy. He yelled "Great God, Sue, the Mexicans are inside our walls! If they spare you, save my child!", then kissed her and returned to his cannon.

It took an hour for the Mexican army to secure complete control of the Alamo. Among the last Texians to die were the 11 men, including Almaron, manning the two 12-pounder cannon in the chapel. The entrance had been barricaded with sandbags, which the Texans were able to fire over. However, a shot from the Mexican 18-pounder cannon destroyed the barricade, and Mexican soldiers entered after an initial musket volley. In the confusion, Susanna was lightly wounded.

On March 7, Santa Anna interviewed each of the survivors individually. Impressed with Susanna, he offered to adopt Angelina and have her educated in Mexico City. Susanna refused, which was not extended to fellow Alamo survivor Juana Navarro Alsbury for her son of similar age.

Santa Anna ordered that the Tejano civilian survivors be allowed to return to their homes in San Antonio. Susanna and Joe, a Texian slave, were allowed to travel towards the Anglo settlements, escorted by Ben, a former American slave who served as Mexican Colonel Juan Almonte's cook. Each woman received $2 and a blanket and was allowed to go free and spread the news of the destruction that awaited those who opposed the Mexican government. Before they departed, Santa Anna ordered that the surviving members of the Mexican army parade in a grand review, intending that Joe and Susanna would thus warn the remainder of the Texian forces that his army was unbeatable.

When the small party of survivors arrived in Gonzales on March 13, they found Sam Houston, the commander of all Texian forces, waiting there with about 400 men. After Susanna and Joe related the details of the battle and the strength of Santa Anna's army, Houston advised all civilians to evacuate and then ordered the army to retreat. Thus began the Runaway Scrape, in which much of Texas' population, including the acting government, rushed eastward to escape the advancing Mexican army.

Illiterate, Susanna left no written accounts of what happened in the Alamo, but did give several similar oral accounts. She remarried soon afterward to a man named John Williams on Nov 27, 1837, but they divorced almost immediately afterward on the grounds of cruelty. She married a third time on Dec 20, 1838 to a man named Francis P. Herring, but he died of alcoholism in 1843. She married a fourth time on Dec 7, 1847, to a man named Peter Belles, but they divorced in 1857, allegedly due to her having an affair. On Dec 9, 1857 she married a fifth and final time to a man named Joseph W. Hannig, a cabinet maker, and with whom she remained for the rest of her life. 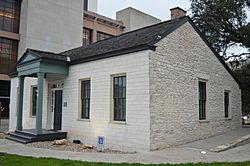 Susanna died in 1883 and was buried in Oakwood Cemetery in Austin, with the following inscription:

Hannig lived long after Susanna (dying in 1890) and placed the original marble marker. The state of Texas added a marble slab above their graves on March 2, 1949. A cenotaph honoring Susanna was placed in the Texas State Cemetery in Austin.

The house Hannig built in Austin in 1869 became a museum, The Joseph and Susanna Dickinson Hannig Museum, dedicated to Susanna and the other Alamo survivors.

In film and other media

In the 2004 version of The Alamo, Laura Clifton portrays Susanna Dickinson.

In 2015, Dickinson was portrayed by Alixandra von Renner, in the History Channel miniseries, Texas Rising.

All content from Kiddle encyclopedia articles (including the article images and facts) can be freely used under Attribution-ShareAlike license, unless stated otherwise. Cite this article:
Susanna Dickinson Facts for Kids. Kiddle Encyclopedia.