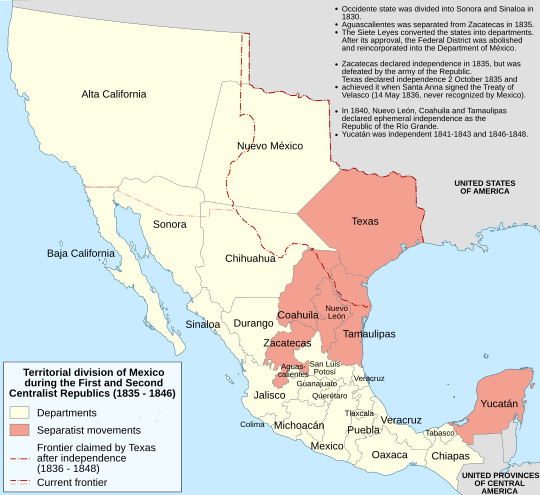 The Runaway Scrape events took place mainly between September 1835 and April 1836 and were the evacuations by Texas residents fleeing the Mexican Army of Operations during the Texas Revolution, from the Battle of the Alamo through the decisive Battle of San Jacinto.

The ad interim government of the new Republic of Texas and much of the civilian population fled eastward ahead of the Mexican forces.

The conflict arose after Antonio López de Santa Anna established martial law in Coahuila y Tejas. The Texians resisted and declared their independence. It was Sam Houston's responsibility, as the appointed commander-in-chief of the Provisional Army of Texas (before such an army actually existed), to recruit and train a military force to defend the population against troops led by Santa Anna.

Residents on the Gulf Coast and at San Antonio de Béxar began evacuating in January upon learning of the Mexican army's troop movements into their area, an event that was ultimately replayed across Texas.

During early skirmishes, some Texian soldiers surrendered, believing that they would become prisoners of war — but Santa Anna demanded their executions.

The news of the Battle of the Alamo and the Goliad massacre instilled fear in the population and resulted in the mass exodus of the civilian population of Gonzales, where the opening battle of the Texian revolution had begun and where, only days before the fall of the Alamo, they had sent a militia to reinforce the defenders at the mission. The civilian refugees were accompanied by the newly forming provisional army, as Houston bought time to train soldiers and create a military structure that could oppose Santa Anna's greater forces.

The towns of Gonzales and San Felipe de Austin were burned to keep them out of the hands of the Mexican army.

Approximately 5,000 terrified residents of New Washington fled from the Mexican army. After a little over a month of training the troops, Houston reached a crossroads where he ordered some of them to escort the fleeing refugees farther east while he took the main army southeast to engage the Mexican army.

The subsequent Battle of San Jacinto resulted in the surrender of Santa Anna and the signing of the Treaties of Velasco.

All content from Kiddle encyclopedia articles (including the article images and facts) can be freely used under Attribution-ShareAlike license, unless stated otherwise. Cite this article:
Runaway Scrape Facts for Kids. Kiddle Encyclopedia.