A view of downtown Lockhart

First Lockhart National Bank building across from the county courthouse

Lockhart is a city in Caldwell County, Texas, United States. It is the county seat of Caldwell County. According to the 2010 census the population of Lockhart was 12,698. Lockhart and Caldwell County are within the Austin-Round Rock metropolitan area. 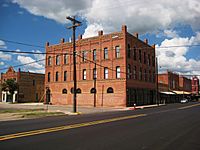 Another view of downtown Lockhart

The city of Lockhart is named after Byrd Lockhart, an assistant surveyor of Green DeWitt and reportedly the first Anglo to set foot in Caldwell County. Lockhart was the site of a victory of the Texans over the Comanche, at the Battle of Plum Creek in 1840. Lockhart was originally called "Plum Creek" but the name was later changed to Lockhart.

Lockhart has several claims to fame. In 1999, the Texas Legislature proclaimed Lockhart the "Barbecue Capital of Texas"; Lockhart has four major barbecue restaurants. The Dr. Eugene Clark Library is the oldest operating public library in Texas. Lockhart was also the subject of an article by the architectural historian and critic Colin Rowe, first published in Architectural Record in 1957, and republished in the collection of his writings As I Was Saying (1996). Rowe sees Lockhart as a "curiously eloquent" example of a Victorian post-frontier American town.

Lockhart has played host to many film sets, as this quaint small town is located just 30 miles (48 km) south of Austin. The 1996 Christopher Guest comedy film Waiting for Guffman and the 1993 drama What's Eating Gilbert Grape were filmed partly in Lockhart, including the historic courthouse and the town square. The city's Wal-Mart store was featured in the 2000 film Where the Heart Is.

On July 30, 2016, a hot air balloon struck a power line and caught on fire, killing all 16 people on board. The hot air balloon crashed near the unincorporated community of Maxwell.

Climate is characterized by relatively high temperatures and evenly distributed precipitation throughout the year. The Köppen Climate Classification subtype for this climate is "Cfa"(Humid Subtropical Climate).

There were 3,627 households out of which 38.0% had children under the age of 18 living with them, 52.0% were married couples living together, 16.6% had a female householder with no husband present, and 25.8% were non-families. 21.9% of all households were made up of individuals and 10.6% had someone living alone who was 65 years of age or older. The average household size was 2.81 and the average family size was 3.28.

All content from Kiddle encyclopedia articles (including the article images and facts) can be freely used under Attribution-ShareAlike license, unless stated otherwise. Cite this article:
Lockhart, Texas Facts for Kids. Kiddle Encyclopedia.