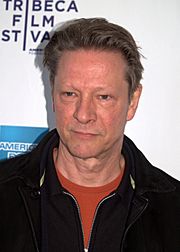 Christopher W. "Chris" Cooper (born July 9, 1951) is an American actor. He is known for his role as John Laroche in the 2002 movie Adaptation for which he won an Academy Award and an Golden Globe Award for Best Supporting Actor.

Cooper was born on July 9, 1951 in Kansas City, Missouri. He was raised in Houston, Texas. Cooper studied at Stephens College and at the University of Missouri.

He was married to Marianne Leone since 1983. They had one son, Jesse Cooper who died in 2005 from SUDEP. Cooper now lives in Kingston, Massachusetts.

All content from Kiddle encyclopedia articles (including the article images and facts) can be freely used under Attribution-ShareAlike license, unless stated otherwise. Cite this article:
Chris Cooper Facts for Kids. Kiddle Encyclopedia.