Kingston is a coastal town in Plymouth County, Massachusetts, United States. According to the 2010 Census, it had a population of 12,629.

Before European settlers arrived, Kingston was within the tribal homeland of the Wampanoag people. Several years before the Mayflower had landed in Plymouth, during the Native American epidemic of 1616 to 1619, the Wampanoag population was severely damaged from a rapidly spreading pandemics due to earlier contacts with Europeans. Several ancient Native American burial sites have been located within the borders of Kingston.

Originally part of Plymouth, Kingston was first settled by Europeans shortly after the landing of the Pilgrims at Plymouth Rock in 1620. It was settled once more in 1635. During 1675, several bloody battles during King Philip's War are believed to have occurred within Kingston's borders and the residence of Governor Bradford, which is now part of Kingston, was raided by Wampanoag warriors.

In 1685, the area was placed within the boundaries of Plymouth County and for a brief time, between 1686 and 1689, the borders of Kingston were within the Dominion of New England.

Kingston was first established as Plymouth's northern precinct in 1717 upon the creation of First Parish Kingston, now a Unitarian Universalist church in the town's center. Kingston was incorporated as a distinct town on June 16, 1726, following a tax dispute between the residents of north and south Plymouth, when the parish was known as the upper class portion of Plymouth. Kingston's borders were carved out of neighboring towns Plymouth, Duxbury, Plympton and Pembroke, all of which were incorporated before Kingston.

Kingston is home to the longest continuously run boat yard in North America, now named the Jones River Landing. The American Revolutionary War era brig, USS Independence, was built by Kingston shipbuilders on the Jones River and has emerged as a town icon, featured on the Kingston town seal.

The tenure of the Independence in the Massachusetts Navy was short, however; the ship was captured in battle off the coast of Nova Scotia by HMS Hope and HMS Nancy. 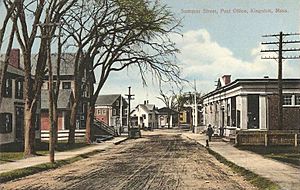 In the early-to-middle 19th century, Kingston flourished as a center for shipbuilding, as well as ice harvesting. Jones River Pond, the largest body of freshwater in town, was used during the long New England winters to harvest ice. The harvested product was then shipped throughout the world. Jones River Pond was even renamed to Silver Lake for marketing purposes during the height of the ice harvesting export industry, and retains the name today. Kingston is also home to the first co-op store in North America, which was closed when the Silver Lake Post Office shuttered operations in 1954.

On April 14, 1857, Kingston annexed a small part of Duxbury. It would be the last addition to the town's borders to date.

In the 1950s Kingston was transformed from a small rural town into an extension of the Boston metropolitan area when Massachusetts Route 3 was constructed, connecting Boston to Cape Cod, with two exits in Kingston (and a third exit immediately over the town line in Duxbury).

Kingston saw its largest population growth in the 1990s when the Old Colony Railroad was reopened as a commuter rail line, connecting once-rural Kingston with Boston, making Kingston an even more viable place for commuters to live. More recently, Kingston has seen the construction of four industrial-sized wind turbines, located along Route 3.

Kingston lies on Kingston Bay, an inlet to the larger Plymouth Bay. The Jones River runs through the town from its source, Silver Lake, to the bay. There are several brooks that branch off the river, as well as several other smaller ponds throughout the town, including Muddy Pond. There is a state forest in the town, located in the southern portion of the town which is commonly used for biking, off-roading, and hunting. Kingston is also the site of Gray's Beach, in a neighborhood called Rocky Nook, just north of the Plymouth town line.

Kingston's highest natural point, with an elevation of 313 feet, is Monk's Hill.

Massachusetts Route 3, also known as the Pilgrims Highway, runs through the eastern portion of town. There are three exits for Kingston: at the Independence Mall, now called the Kingston Collection, in the southern portion of town, at Route 3A, and on the Kingston/Duxbury town line where Route 3A again crosses the highway. The new highway portion of U.S. Route 44 passes through the southern portion of town, along the edge of the state forest, on its way to its new intersection with Route 3. Additionally, Routes 27, 53, 80, and 106 all end in the town, with all except Route 27 (which ends at Route 106) ending at their intersections with Route 3A.

Kingston is located on the 42nd parallel, recognized by a roadside memorial on Landing Road near the Bay Farms area.

All content from Kiddle encyclopedia articles (including the article images and facts) can be freely used under Attribution-ShareAlike license, unless stated otherwise. Cite this article:
Kingston, Massachusetts Facts for Kids. Kiddle Encyclopedia.