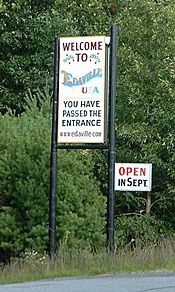 Carver is a town in Plymouth County, Massachusetts, United States. The population was 11,509 at the 2010 census. It is named for John Carver, the first governor of the Plymouth Colony.

Carver separated from Plympton, Massachusetts, and was incorporated in 1790 because many residents lived too far away to attend church in Plympton. The town was named for John Carver, the first Governor of the Plymouth Colony. Initially agricultural, Carver was known for the iron ore from its swamp lands used to make cooking tools by the 1730s. The first iron works was "Pope's Point Furnace", built in 1732, which operated for a century by using the bogs and Sampson's Pond. Over the next 150 years, sheep shearing and lumber mills were important in Carver.

Most people at the time lived in the villages of South and North Carver and Wenham, later called East Carver. European settlers had also given the names "Colchester" and "Lakenham" to what is now North Carver, and settled in what was known as South Meadow. Each village supported at least one schoolhouse. As the market for iron ore declined in the latter part of the 19th century, Carver began cranberry farming as a new use for the town's swamplands. Farmers began growing cranberries in the 1870s, and by 1900 it was Carver's farmers who raised a fifth of all cranberries grown in the United States. A railroad line connected Carver to New York and Boston in 1890, further establishing the town.

Money from the iron helped the community to grow, as evidenced by several mansions still in existence in the town. Also located in Carver is Savery's Avenue, the first divided highway in America, which was opened to the public in 1860 by William Savery. The trees between the roads and on the outside of them were to be left for "shade and ornament for man and beast". Both road beds were macadamized in 1907. A portion of the expense was advanced by the daughters of the builder, Mrs. Mary P.S. Jowitt and Ms. H.D. Savery. By the 1940s the cranberry harvest was the largest in the world, and today it is still a major business in town. Because of the land taken for the bogs, however, growth is limited, giving the town a rural flavor it takes pride in. In 2012, most cranberry bogs are being replanted in favor of a new hybrid cranberry crop.

Carver also has two notable tourist attractions. Edaville Railroad is a narrow-gauge railroad attraction which opened in 1949. It has long been a family tourist attraction in Southeastern Massachusetts, especially for its festival of lights around Christmastime. It has experienced a revival in recent years, after being sold in 1991 and nearly closing. The town is also the site of King Richard's Faire, a re-creation of a 16th-century English fair which is open on weekends throughout September and October. It is New England's largest Renaissance fair.

Ryan Semple and Pro wrestler Mike Bennett are from Carver.

According to the United States Census Bureau, the town has a total area of 39.7 square miles (102.9 km2), of which 37.4 square miles (96.9 km2) is land and 2.3 square miles (6.0 km2), or 5.87%, is water. It is locally famous for the large number of cranberry bogs throughout the town. Carver is bordered by Plympton to the north, Kingston to the northeast, Plymouth to the east, Wareham to the south, and Middleborough to the west. Carver is located approximately 45 miles (72 km) south-southeast of Boston and 38 miles (61 km) east of Providence, Rhode Island.

Carver's geography is shaped by its many small brooks, rivers and ponds including Vaughn Pond and Bates Pond. The majority of them eventually drain into Buzzards Bay, although some in the north of town lead to Cape Cod Bay or Narragansett Bay. The town also has an abundance of pine and cedar trees, and a portion of Myles Standish State Forest takes up much of the southeast corner of town. A large cedar swamp occupies the geographic center of the town. The town is also the site of a campground, a sportsmen's club, and a small town park at the center of town.

There were 3,984 households out of which 36.6% had children under the age of 18 living with them, 63.3% were married couples living together, 8.7% had a female householder with no husband present, and 24.4% were non-families. 19.7% of all households were made up of individuals and 11.7% had someone living alone who was 65 years of age or older. The average household size was 2.80 and the average family size was 3.23.

The town is crossed in the north of town by U.S. Route 44, a two-lane divided highway which meets Route 3 (Massachusetts) in Plymouth. The highway was recently expanded, so that rather than the highway portion ending at Route 58 (the other main route), whose right-of-way extends into Carver to a few miles after the Carver/Wareham town line. The nearest national and international airport is Logan International Airport in Boston. Another national airport nearby is T. F. Green Airport in Warwick, Rhode Island

All content from Kiddle encyclopedia articles (including the article images and facts) can be freely used under Attribution-ShareAlike license, unless stated otherwise. Cite this article:
Carver, Massachusetts Facts for Kids. Kiddle Encyclopedia.