Dighton is a town in Bristol County, Massachusetts, United States. The population was 7,086 at the 2010 census. The town is located on the western shore of the Taunton River in the southeastern part of the state.

Dighton was originally part of Taunton's South Purchase and other surrounding towns. It was separated in 1672, officially incorporated in 1712. It was named for Frances Dighton Williams, wife of Richard Williams, a town elder. At the time of incorporation, the town included land on both sides of the Taunton River, including the land of Assonet Neck, which includes Dighton Rock, a rock found in the shallows of the river which includes cryptic carvings whose origins are debated to this day. However, in 1799, that land on the east bank of the river was annexed by Berkley, thus giving that town the claim of being the home of the rock. 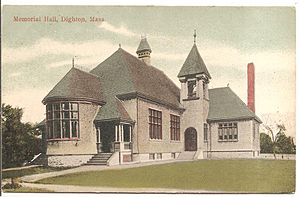 As it was located at the beginning of the tidewater of the river, Dighton was a shipbuilding community, and even had status as a port of call. Because of this, and its centralized location, it became a shipping hub for southeastern Massachusetts. There were also cotton mills, manufacturers and farming concerns in the town. With time, however, many of these industries left, leaving the town as a rural suburban community with some small farms.

Dighton is bordered by Rehoboth to the west, Swansea to the southwest, Somerset to the south, the Taunton River and the town of Berkley to the east, and the city of Taunton to the north. In addition to being bordered by the Taunton River, it also is bordered by the Three Mile River, a tributary which empties into the Taunton along the northeast border of town. The town is also crossed by the Segreganset River, another tributary of the Taunton which flows through the center of town, as well as several smaller brooks. The highest point in the town is in its northwest corner, where the elevation rises above 236 feet (72 m) above sea level. 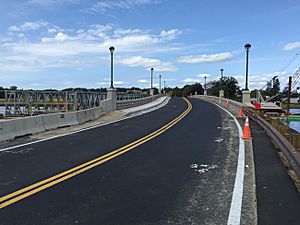 Dighton is the site of the Berkley–Dighton Bridge, originally a one-lane bridge built in the 1890s as a link between Center Street in Dighton and Elm Street in Berkley. It is the only span crossing the Taunton River between the Brightman Street Bridge between Somerset and Fall River, and the Plain Street Bridge in Taunton, a drive of 12 1⁄2 miles (20 km) (and 4 mi or 6 km south of the Plain Street Bridge). In 2010, the old bridge was demolished and a temporary bridge handled traffic as a new bridge was built. In August 2015 a new two-lane bridge opened to traffic.

There were 2,201 households out of which 37.4% had children under the age of 18 living with them, 64.5% were married couples living together, 9.9% had a female householder with no husband present, and 21.9% were non-families. 18.8% of all households were made up of individuals and 9.7% had someone living alone who was 65 years of age or older. The average household size was 2.78 and the average family size was 3.17.

Dighton is home of the Cow Chip Festival. The Dighton Lions Club hosts the event. Every June a traveling carnival comes and sets up behind the Town Hall. Fireworks have been a recent addition to the festival. There are rides and a carnival mid-way along with food, musical performances, a lawn tractor pull, woodsman competition pony rides and the chicken BBQ. The name was given to it because they set up squares on the field behind the town hall. They place cows out on the enclosed squares. People then place bets on the square that they believe will be defecated on first by one of the cows.

Sweets Knoll State Park is a fifty-six acre park located in Dighton. It was purchased in June 2009, and includes two miles of old railroad bed which may be adapted into a walking and biking path, picnic areas, a small boat launch, and fishing.

Dighton is served by the Dighton Public Library. As of December 2009, the Library Director was Jocelyn Tavares.

All content from Kiddle encyclopedia articles (including the article images and facts) can be freely used under Attribution-ShareAlike license, unless stated otherwise. Cite this article:
Dighton, Massachusetts Facts for Kids. Kiddle Encyclopedia.