The town was first settled by Europeans in 1661 as Nemasket, later changed to Middlebury, and officially incorporated as Middleborough in 1669. The name Nemasket came from a Native American settlement along the small river that now bears the same name. Nemasket may have meant "place of fish", due to the large amount of herring that migrate up the river each spring. There are no contemporary records that indicate the name Middlebury was taken from a place in England, and changed to the more modern Middleborough. The names Middlebury and Middleborough were actually derived from the city of Middelburg, Zeeland, the westernmost province of the Netherlands. Middelburg was an international intellectual center and economic powerhouse. The English religious dissenters called the Brownists developed their governance institutions in Middelburg before emigrating on the Mayflower, and were the earliest settlers of Middleborough where their town and church governance ethics were continued.

During King Philip's War (1675–76), the town's entire populace took shelter within the confines of a fort constructed along the Nemasket River. The site is located behind the old junior high school (now a kindergarten), and is marked by a state historical commission marker along Route 105. Before long, the fort was abandoned and the population withdrew to the greater shelter of the Plymouth Colony; in their absence, the entire village was burned to the ground, and it would be several years before the town would be refounded. Western Middleborough broke away in 1853 and formed the town of Lakeville, taking with it the main access to the large freshwater lakes there, including Assawompset Pond.

Middleborough was once a large producer of shoes and is still home to the Alden Shoe Company, one of the last remaining shoe manufacturers in America. The local Maxim Motors manufactured fire engines from 1914-1989. Middleborough has since become the cranberry capital of the world, hosting the corporate headquarters of Ocean Spray Cranberries. Notable sights include the 1870s Victorian-style town hall, the Beaux Art style town library (1903), and in the spring, the Nemasket River alewife and blueback herring run upstream to the Assawompset Ponds complex to spawn.

In recent history, Middleborough has made its mark through the prowess of its Little League Baseball program. In 1994 the Middleborough All Stars reached the Little League World Series by defeating Milburn-Short Hills, New Jersey to take the East Region title. The team would finish 3rd in the United States. They are one of only two Massachusetts Little League teams to win the East title (Andover Little League, 1988) before the splitting of the New England and Mid-Atlantic Regions in 2001. In 1999, the team again won the Massachusetts State title and fell in the East Region final to Toms River, New Jersey - the eventual U.S. runner-up.

Middleborough lies on the western border of Plymouth County. It is bordered by Bridgewater and Halifax to the north, Plympton and Carver to the east, Wareham and Rochester to the south, and Lakeville, Taunton and Raynham to the west. Despite its name, Middleborough is not located anywhere near the other 11 "-boroughs" in the state, lying south and east of all of them. The town is approximately 15 miles (24 km) west of Plymouth, 30 miles (48 km) east of Providence, Rhode Island and 40 miles (64 km) south of Boston.

Middleborough's rivers and brooks feed in two directions. The Taunton River, Nemasket River and their tributaries flow southeastward as part of the Taunton River Watershed, which empties into Narragansett Bay. The other waterways of the town, including the Weweantic River, flow southward into Buzzards Bay. Along Middleborough's border with Lakeville lie the Assawompset, Pocksha and Great Quittacas ponds. Tispaquin Pond, Woods Pond, and several other ponds make up the town's other bodies of water. Middleborough has four wildlife management areas, as well as the Beaver Dam, Great Cedar and Little Cedar Swamps, the swamps being located in the north of town. The town is also the site of several cranberry bogs, especially in the southeastern part of town along the Carver town line. Ocean Spray's headquarters are just over the town line in Lakeville. 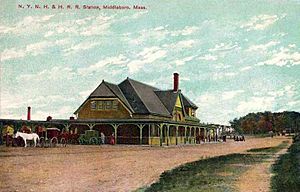 Since the 1840s Middleborough has served as a major rail transportation hub for southeastern Massachusetts, with at one time five rail lines radiating out from the town. Today three rail lines radiate from Middleborough, toward Boston, Taunton and Cape Cod. Two rail freight companies serve Middleborough: CSX Transportation, which serves the Boston, Taunton and a short portion of the Cape Cod lines; and the Massachusetts Coastal Railroad, which serves Cape Cod. The nearby Middleborough/Lakeville commuter rail station of the MBTA's commuter rail system provides frequent direct service to Boston's South Station, and seasonal service to Cape Cod via the CapeFLYER train. The nearest inter-city (Amtrak) passenger rail stations are Providence, Route 128 station in Westwood and Boston's South Station.

The nearest regional airports are Taunton Municipal Airport and Plymouth Municipal Airport; the nearest national and international airports are T. F. Green Airport in Warwick, Rhode Island, and Logan International Airport in Boston. From 1954 to 1959, a small runway called North Middleboro Airpark was constructed. It was a 3,000 foot-long paved runway, although it was not depicted in the November 1954 Boston Sectional Chart. Sometime between 1982-1994 it was closed,as it was depicted simply as "Landing Strip" on the 1994 USGS topo map. A small field in South Middleborough is also used a place for recreational aircraft, but not for transportation.

There were 6,981 households out of which 38.4% had children under the age of 18 living with them, 56.4% were married couples living together, 12.2% had a female householder with no husband present, and 26.7% were non-families. 20.4% of all households were made up of individuals and 7.4% had someone living alone who was 65 years of age or older. The average household size was 2.78 and the average family size was 3.23.

All content from Kiddle encyclopedia articles (including the article images and facts) can be freely used under Attribution-ShareAlike license, unless stated otherwise. Cite this article:
Middleborough, Massachusetts Facts for Kids. Kiddle Encyclopedia.