Raynham is a town in Bristol County, Massachusetts, United States, located approximately 32 miles (51 km) south of Boston and 22 miles (35 km) northeast of Providence, Rhode Island. The population was 13,383 at the 2010 census. It has one village, Raynham Center.

The area that is now Raynham was settled in 1639 as a part of Taunton, and was founded by Elizabeth Pole, the first woman to found a town in America. In 1652, bog iron was found along the Two Mile (Forge) River. Soon after, the Taunton Iron Works was established by residents James and Henry Leonard. It was the first successful iron works established in what was then Plymouth Colony, and operated from 1656 to 1876. It was not the "First Iron Works in America", as proclaimed on the Town's official seal, having been predated by the Saugus and Braintree iron works. The success of the Taunton Iron Works, however, led to the establishment of other iron works throughout the colonies.

Raynham played a key part in King Philip's War. The Leonards had forged a friendship before the war began with King Philip, who lived in the area. It is said that Philip agreed to spare the town from the mass destruction if the Leonards repaired his troops' weapons in their iron forge.

The eastern end of Taunton was separated from that town and incorporated as Raynham on April 2, 1731, named after the English village of Raynham in the county of Norfolk, England. Many ships' hulls were built along the Taunton River in Raynham, which were sailed down the river towards Fall River and Narragansett Bay for final fittings. The town also had other small manufacturing industries, but for the most part it was known for its rural and agrarian base.

The intersection of Interstate 495 and Massachusetts Route 24, a four-lane divided highway, is located at the town's border with Bridgewater. Additionally, U.S. Route 44, Massachusetts Route 104 and Route 138 pass through the town. Route 24 has one exit which gives access to the town, Exit 13 (Route 44), and there is also a Raynham exit on Interstate 495, Exit 8 (Route 138).

Raynham is one of the towns covered by the Greater Attleboro Taunton Regional Transit Authority (GATRA) bus service. The Middleborough-Lakeville line of the MBTA's commuter rail's nearest stop is in neighboring Bridgewater. Raynham is the site of a proposed commuter rail station, Raynham Place, on the Stoughton Branch option of the MBTA's South Coast Rail project. The station would be located next to the former Raynham-Taunton Greyhound Park. In March 2011, following the release of the U.S. Army Corps of Engineers' Draft Environmental Impact Report, Gov. Deval Patrick's administration and the MBTA announced this alternative as the best option for achieving all the goals of the project.

There were 4,143 households out of which 36.7% had children under the age of 18 living with them, 63.8% were married couples living together, 10.6% had a female householder with no husband present, and 22.0% were non-families. 17.9% of all households were made up of individuals and 8.5% had someone living alone who was 65 years of age or older. The average household size was 2.80 and the average family size was 3.18.

Raynham Park is located in Raynham and holds the world record for largest annual handle. All racing at the park was formally ended on January 1, 2010 after the state election banned all greyhound racing. The building remains to host simulcast racing. In 2011 the Wampanoag Indian tribe indicated an interest in establishing a "Racino"-style gaming casino at the Raynham dog track., but in August 2011 talks broke down. Raynham also has some of the best youth sports programs in the state. With the raynham giants football team winning 3 national championships"1999, 2001 and 2014. Also the youth baseball "RYBSA" and soccer programs are considered to be some of the better programs around. 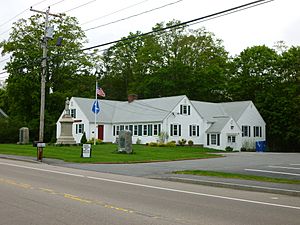 All content from Kiddle encyclopedia articles (including the article images and facts) can be freely used under Attribution-ShareAlike license, unless stated otherwise. Cite this article:
Raynham, Massachusetts Facts for Kids. Kiddle Encyclopedia.