John Howland (1592/3 – February 23, 1672/3) was a passenger on the Mayflower. He was an indentured servant and, in later years, the executive assistant and personal secretary to Governor John Carver and accompanied the Separatists and other passengers when they left England to settle in Plymouth, Massachusetts. He signed the Mayflower Compact and helped found Plymouth Colony. During his service to Governor Carver, Howland assisted in notable early business of the colony, such as the making of a treaty with the Native American Sachem Massasoit of the Wampanoag."

John Carver, the first governor of the Plymouth Colony, died in April 1621. In 1626, Howland was a freeman and one of eight settlers who agreed to assume the colony's debt to its investors in England in exchange for a monopoly of the fur trade. He was elected deputy to the General Court in consecutive years from 1641–1655 and again in 1658. 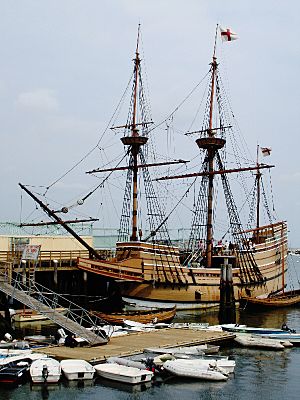 John Howland was born in Fenstanton, Huntingdon, England around 1591 and was the son of Margaret and Henry Howland, and the brother of Henry and Arthur Howland. The brothers travelled later from England to Plymouth.

The Mayflower left Plymouth, England on 16 September 1620. The first few days had good weather. They ran into a great storm with heavy winds and large waves. For days the ship could not use it's sails. The first mention of him was by William Bradford. During the storm Howland was walking on deck and was washed overboard by a large wave. He somehow caught a rope and was pulled to safety. In all there were 102 passengers and 30–40 crew. On 19 November 1620, the Mayflower reached land at Cape Cod hook. They landed on November 21.

They wrote the Mayflower Compact, which made rules on how they would live and treat each other. The Mayflower was supposed to land in Virginia Colony, but the ship was too damaged and they were forced to land at Cape Cod now called Provincetown Harbor.

When the Mayflower landed several men went to land to try to find a place where they could live. One of the earliest exploration missions included William Bradford, John Carver, Myles Standish, Edward Winslow, John Howland, Richard Warren, Stephen Hopkins and Edward Doty. Hopkins was the most experienced. He had seen Native Americans when he was at Jamestown. According to Bradford, they set off in below freezing weather, many of the men already being ill.

Half of the Pilgrims died by the end of the first winter. Howland lived with the Carver family The following spring, on an very warm day in April, Governor Carver was planting corn when he came out of a cornfield feeling ill and he soon died. Carver was much loved by the passengers. He was a wealthy man who very hard worked along with all of the pilgrims. Bradford wrote Carver had worked himself to death. After Carver's death, Howland became a freeman. This meant that he could own his own land and could vote in Plymouth affairs. Howland was given an acre for each member of the Carver household including himself and Elizabeth Tilley, Desire Minter, and a boy named William Latham. 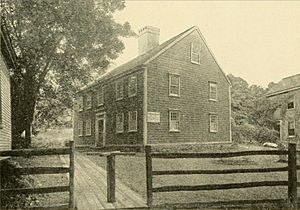 John Howland House built in 1666 in Plymouth, Mass. Photograph circa 1921

Howland was one of eight settlers who agreed to help to pay the colony's debt to the men in England who had paid for the voyage. From 1641-1655 Howland was voted deputy to the Massachusetts General Court. He was elected again in 1658.

In Plymouth the Howlands lived on the north side of Leyden Street. They lived in other places such as Duxbury and Kingston where they had a farm. The farm burned down in 1675 during King Philip's War. By that time, John had died and Elizabeth moved in with her son, Jabez.

Until Bradford's Of Plymouth Plantation was discovered in 1856, it was presumed that John Howland's wife, formerly Elizabeth Tilley was the adopted daughter of Carver's. Actually her parents, uncle and aunt came to the New World but died of sickness during the first winter.) This mistake was even recorded on a gravestone that was erected for Howland on Burial Hill, in 1836. They had ten children.

All content from Kiddle encyclopedia articles (including the article images and facts) can be freely used under Attribution-ShareAlike license, unless stated otherwise. Cite this article:
John Howland Facts for Kids. Kiddle Encyclopedia.