Duxbury (alternative older spelling: "Duxborough") is a historic seaside town in Plymouth County, Massachusetts, United States. A suburb located on the South Shore approximately 35 miles (56 km) to the southeast of Boston, the population was 16,090 at the 2020 census.

Geographic and demographic information on the specific parts of the town of Duxbury is available in the articles Duxbury (CDP), Green Harbor, and South Duxbury.

The area now known as Duxbury was inhabited by people as early as 12,000 to 9,000 B.C. By the time European settlers arrived here, the region was inhabited by the Wampanoags, who called this place Mattakeesett, meaning “place of many fish.”

In 1620, English settlers known as the Pilgrims established their colony in nearby Plymouth. Per the terms of their contract with financial backers in London, they were required to live together in a tight community for seven years. At the end of that term in 1627, land along the coast was allotted to settlers for farming. Thus, the coastline from Plymouth to Marshfield, including Duxbury, was parceled out, and many settlers began moving away from Plymouth. 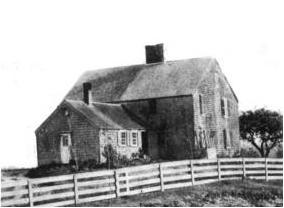 At first, those who settled in Duxbury came to work their new farms just in the warmer months and returned to Plymouth during the winter. It was not long, however, before they began to build homes on their land, and soon requested permission from the colony to be set off as a separate community with their own church. Duxbury, which originally included land that is now Pembroke, was incorporated in 1637.

Some of the most influential men in the colony received grants in Duxbury and became its first leaders. Captain Myles Standish, the military leader of the colony, lived in “the Nook,” an area now known as Standish Shore. Elder William Brewster was for many years the religious leader of the colony, in which he led services to the colony until it received its own minister in 1637. John Alden was another important settler. His house, now a museum on Alden Street, was the site of many important meetings of the colony’s leaders. The graves of some of Duxbury’s first settlers can be found in the Old Burying Ground on Chestnut Street, next to the site of original meetinghouse. Theory has it that the town was named by Myles Standish after the family estate of his childhood in Lancashire. The ancient Standish family in northern England owned much land and large estates, including the two main family headquarters of Standish Hall and Duxbury Manor, in Lancashire, since before the Middle Ages. Myles Standish's will delineates his inheritance rights to very particular lands near and around Standish and mostly Duxbury Manor, stating his descent from both lines of the Standish family; and so it has been suggested that he named the new town in Massachusetts after the estate where he grew up.

Duxbury was primarily a farming community throughout the 17th and 18th centuries. Its quiet history in the 18th century was interrupted only by the Revolutionary War.

In the years leading the American Revolutionary War, opposition to the British was quite fierce in Duxbury, with crowds meeting regularly at Captain's Hill to burn effigies of British officials in protest of the Stamp Act. In 1775 General Thomas Gage had to dispatch a company of regulars to the town in response to pleas from the loyalists at Marshfield, Massachusetts.

When the Minuteman alarm sounded on April 19, 1775, with news of the battles at Concord and Lexington. Many volunteers mustered to the regiment of Colonel Theophilus Cotton from Plymouth, Kingston and Duxbury, headed for Marshfield to engage the British. The colonial officers held a council of war at the home of Lt. Col. Briggs Alden in Duxbury.

The most remarkable period in Duxbury’s history, the shipbuilding era, began immediately after the American Revolution. Following the Treaty of Paris, the newborn nation was granted fishing rights on the Grand Banks. Several families took advantage of the new opportunity and began to build large fishing schooners. Soon, the schooners built in the 1790s gave way to larger brigs and eventually three-masted ships. As several merchant families began to amass large fleets, shipyards and other ancillary industries flourished and Duxbury prospered. By the 1840s, Duxbury boasted about 20 shipyards and produced an average of ten large sailing vessels per year.

The largest industry in Duxbury was owned by Ezra Weston, who came to be known as "King Caesar" due to his success and influence. Weston began building small vessels in 1764 and soon became famous for his successful merchant fleet. His son, Ezra Weston II, who inherited his father’s kingly sobriquet, would bring the industry to its height. By 1841, the younger King Caesar had constructed the largest vessel built in New England up to that time. The ship Hope was an astounding 880 tons. Lloyd's of London recognized Weston as the owner of the largest fleet in America, and this judgment was confirmed by Daniel Webster in a speech in 1841. His empire, a fore-runner of vertical integration, dominated the town. The King Caesar House is now a museum owned by the Duxbury Rural and Historical Society.

The shipbuilding era in Duxbury ended as quickly as it began. By the 1850s, sailing vessels were made obsolete by other modes of transportation such as steamships and railroads. While other Massachusetts towns grew, Duxbury went into a long economic decline.

There was, however, a silver lining. By the 1870s, Duxbury’s rural character and unspoiled bay began to attract summer visitors. Duxbury soon gained a reputation as an idyllic summer resort. With the 1871 completion of the Duxbury & Cohasset Railroad, large numbers of city-folk from Boston could pay $1.50 for a round-trip ticket and enjoy Duxbury’s refreshing environment. Boarding houses sprang up everywhere. The Miles Standish Hotel on the Nook soon became enormously popular. The Myles Standish monument, completed in 1898, was a result of this tourist influx.

This pattern continued in Duxbury well into the 20th century. It was not until the construction of Route 3 that transportation to Boston became expedient and the town’s population exploded with the arrival of thousands of year-round residents. 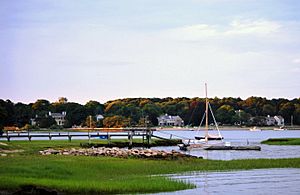 According to the United States Census Bureau, the town has a total area of 37.6 square miles (97.4 km²), of which, 23.8 square miles (61.5 km²) is land and 13.9 square miles (35.9 km²) (36.87%) is water. Duxbury is bordered by Cape Cod Bay to the east, Duxbury Bay, Kingston Bay and Plymouth to the southeast, Kingston to the southwest, Pembroke to the west and northwest, and Marshfield to the north. The town's border with Plymouth is due to the town's having the only land access to Saquish Neck, a thin, hook-shaped strip of land along Duxbury Bay whose tip is in Plymouth.

Duxbury is the sixth largest cranberry producer in Massachusetts. It has come to be known in recent years also for its oyster beds, as well as other shellfish. The town has many ponds and bogs throughout. The Back River lies along the western edge of Saquish Neck, and has many tributaries from the local rivers, brooks and marshes. There are several sanctuaries, a conservation area and other forests within the town, especially in the western half.

Route 3, a two-lane freeway also known as the Pilgrims Highway, passes through the town, with exits 20 and 22 granting access to the town from it. Routes 3A, 14, 53 and 139 also pass through the town. Routes 14 and 139 both end in the town, and Route 53 ends less than 1/2 mile south of the town line, at its intersection with Route 3A in Kingston.

There is no rail or air service in town. 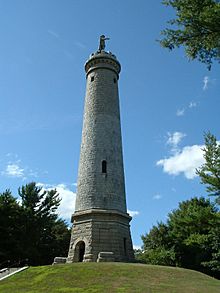 The Myles Standish Monument, not far from the site of his home

Over $26 million of Duxbury's annual budget is devoted to the town's nationally recognized public school system. According to Newsweek magazine's 2005, 2006, and 2007 rankings of the Nation's Top 1200 Public High Schools (the top 5% of public school systems), Duxbury was ranked at 246, 185, and 142 respectively. By 2013, it had fallen off of the Newsweek national rankings and locally, Boston Magazine's yearly town/school rankings, dropped it out of a top 40 spot.

Duxbury operates its own school system for the town's approximately 3,400 students, serving preschool through 12th grade. Chandler School is located near Tree of Knowledge Corner in the west of townm and serves students from pre-kindergarten through second grade. The Alden Elementary School, near the John Alden House, serves grades 3–5.

Duxbury Middle/High School is located on Alden Street and serves grades 6–12. Duxbury High School was rebuilt into a combined building along with Duxbury Middle School, called the 21st Learning experience. Duxbury's athletic teams are known as the Dragons, and their colors are green and white. Their chief rival is Marshfield High School, team mascot the Rams, and they play against them in the Thanksgiving Day Tournament. It is a local event whose rivalry goes back 30 years.

There are two private schools located in Duxbury. Bay Farm Montessori Academy is a private, independent school located in the southern corner of town and serves Toddlers through grade 8. Good Shepherd Christian Academy is a private, Christian school which serves students from kindergarten through eighth grade. The nearest private high school is Sacred Heart in Kingston. The town has no vocational schools.

All content from Kiddle encyclopedia articles (including the article images and facts) can be freely used under Attribution-ShareAlike license, unless stated otherwise. Cite this article:
Duxbury, Massachusetts Facts for Kids. Kiddle Encyclopedia.